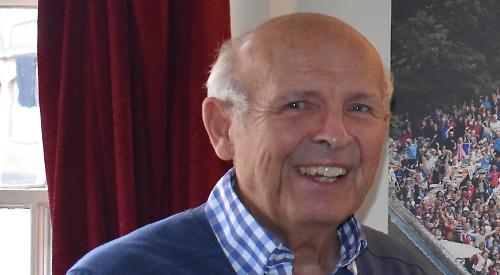 The evening also included a presentation of “Recollections and ramblings” by renowned local photographer Tim Hodges.

He began by explaining how the society played a part in his taking up photography as a profession.

Tim had entered two pictures in a photographic competition and the one of Mill Green, Wargrave, in the snow had won.

He was invited to a party held by the society’s resident Lord Remnant and presented him with a copy of the winning image.

This led to Lord Remnant asking Tim if he would take the official photographs at a reunion of the Earl Marshal’s 1953 Gold Staff Officers to be held at the House of Lords.

Apart from images of the “below stairs staff”, there would be a formal portrait of the Gold Staff Officers, who had been escorts at the Coronation in 1953, with the Queen and Prince Philip. That went well and at the next reunion, 10 years later, Tim was again asked to take the official photographs.

There were then fewer Gold Staff Officers able to attend, so the event included those who had served as pages at the coronation. Tim commented that the Queen is a lovely person to take photographs of.

He had also taken a picture of the House of Lords seen from across the Thames.

When he discovered that the Lords’ gift shop did not have anything similar, he arranged for it to stock copies of his photograph, which sold well — he was now a professional photographer.

Most people who pass through Wargrave will be familiar with its buildings but Tim observed that most will be unaware of how good a community Wargrave is.

Very few people choose to leave the village once they have moved here. Examples of this were the parties held on Mill Green to celebrate the Queen’s jubilee, and her 90th birthday.

Tim captured the spirit of both events with photographs taken from the top of the church tower. He entered one of these in a portrait of Britain competition and it was adjudged worthy of a double page spread in the resultant book.

Other community activities that Tim portrayed were the Omani evening, part of the 1985 village festival, the activities of the Wargrave Adventurers Group (young and not so young ascending Snowdon, or cycling or riding the Ridgeway), the “mini-marathon” and the Wargrave and Shiplake Regatta, the latter no longer including the “greasy pole” event. There was even an “alternative” village festival, which had featured a water-less version of the Henley Royal Regatta — teams in linked boxes representing the boats running backwards over straw bales.

A series of photographs Tim had taken from a microlight gave a different view of the village, while images of the area around the River Loddon and Thames recorded the floods that have affected the area from time to time.

Tim then showed what he called “Wargrave’s Hidden Secret”.

The stones of a Jersey Temple were gifted to a one-time governor of the state and re-erected on ground overlooking the Thames.

The site now also includes a distinctive iconic house designed by the American architect Frank Lloyd Wright. Tim had captured both on film during a society visit many years ago.

The last of his recollections were of various village “characters”.

The first was a thoughtful John Ratings, the former vicar, taking part in the Wargrave Theatre Workshop’s production of Measure for Measure.

Others included Oliver Cock, the first Olympic canoe coach; Robert Morley, the actor; David Imrie, the village newsagent who, as a Chelsea pensioner was taking part in the Remembrance Day parade; Theresa May at the unveiling of the Flying Fortress crew memorial, Jim Waldron, who campaigned for a long time for its creation; Paul Daniels (one, in which Tim was experimenting with a new high-speed flash, captured the cascading cards as the magician shuffled them); John Connell, the local antique shop owner; Alan Richardson, the village hairdresser; Douglas Goddard, former district councillor; village pharmacist Fred Freeman and society committee members at a festival fete many years ago.

Members enjoyed spotting many other familiar faces — present and past — in Tim’s portrayal of the village over the last few decades.

The next meeting will be on Tuesday, January 14 when Aldon Ferguson will recall “The role of women at Danesfield and Phyllis Court in photographic interpretation in the Second World War”.

On Tuesday, February 11. Catherine Sampson will give an insight into Georgian cooking.

Meetings are held at the Old Pavilion at Wargrave Recreation Ground, starting at 8pm.

For more information, call Peter Delaney on 0118 940 3121 or visit www.wargravehistory.org.uk