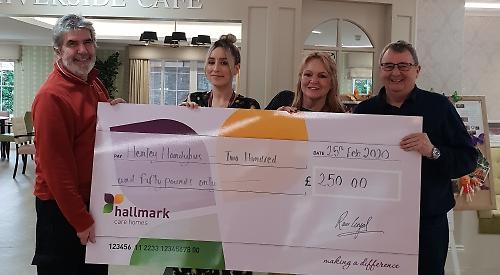 The Henley HandyBus has received £250 from a new care home in the town. Henley Manor, in Mill Lane, wanted to support the charity because it helps elderly people and relies on donations.

The charity, which has been going for more than 30 years, transports people who have no access to transport or need specialist help to get around. It helps up to 15 elderly people and wheelchair-users every day, taking them to local clubs, supermarkets and the 60 Plus Social Club and home again. The charity has said it may have to cut back on the number of runs it makes following a steady decline in passengers over the past year.

Chairman of trustees Richard Hodgkin said: “I’d like to thank Henley Manor for the cheque, which is very much appreciated..”

Charlotte Bennett, customer relationship manager at Henley Manor, said: “The HandyBus plays a vital role, enabling them to continue getting out and about to meet their friends and go shopping. The residents at Henley Manor will also be using the service.”