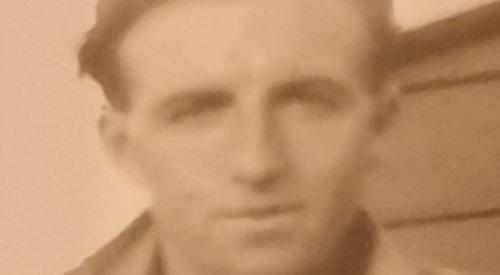 He was the son of coalminer Thomas Jewitt and his wife Mary (née Stewart) and had two brothers, John and Maurice.

Tom came to Oxfordshire and worked at Turners Court, a vocational training centre for underprivileged boys in Wallingford.

He struck up a friendship with William (Bill) Harvey and his wife Edith, who also worked at Turners Court, Bill as a carpenter and Edith as a cook. Tom lodged with the family.

By 1940 Tom was an iron moulder and had been living with the family for 10 years at No 2 Dormer Cottages, The Street, Crowmarsh Gifford.

He and Bill were working for Lister Wilder in Crowmarsh.

On May 14, 1940, they both joined the Local Defence Volunteers at Crowmarsh (later to become the 5th Battalion (Henley) Oxfordshire Home Guard) following an appeal for volunteers made by Sir Anthony Eden, Secretary of State for War.

They were very keen to do their bit as their jobs were a reserved occupation.

Local Defence Volunteers from Wallingford (Berkshire), who were on the other side of the river, came to ask for volunteers to help further down the railway line to keep an eye out for saboteurs.

Reports had come in that there was indeed a real case of spies and 5th columnists all over England.

Bill and Tom were asked to go on duty. Both men had not long finished work and Bill needed to put his three children to bed as Edith was in very poor health, so Tom said he would go alone.

At 8.45pm a patrol set off down the river to the Cholsey railway viaduct on the Great Western Railway London to Bristol mainline that spanned the River Thames dividing Berkshire and Oxfordshire.

It is believed the men on duty that night were as follows:

Volunteers Frederick James Invermee (in charge of the Berkshire side of the viaduct) and John Croxford and others unknown.

The two men set off along the line and after 50 yards found a smashed rifle. Croxford continued and found a body.

At 3am on the Oxfordshire bank Green and Wheeler went to relieve Jewitt and Wilder.

Wilder reported that Jewitt had been missing for 20 minutes.

He stood guard and Green went up the line to find Jewitt and met Croxford with the body. This was identified as Tom Jewitt, who had been hit by a train.

Tom’s body was moved from the track to prevent further damage and Croxford was sent to get Dr Cooper and the police.

Tom was 31 years old when he died. According to Jim Harvey, Bill’s son, his father never really got over the death of his friend and never forgave himself for not accompanying him on duty that dreadful night.

The inquest concluded that “death was due to shock due to injury caused by a passing train and that such injury was caused by misadventure”.

Tom was buried at St Mary’s Church, Newnham Murren, not far from his home in Crowmarsh Gifford on the Oxfordshire side of the river. The grave has now been found.

He is also commemorated on the stone to those who lost their lives in the war at the parish church of Saint Mary Magdalene, although his surname is misspelled as “Jowett”. Perhaps this was how local people knew Tom as his North-East accent may have made Jewitt sound like Jowett. There is no record of Tom at the Commonwealth War Grave Commission, so we at the Oxfordshire Home Guard Living History Group have given all the details and records needed (the police and coroner’s reports and death certificate) to the commission to have Tom recognised for a headstone and, more importantly, to have his name added to the Home Guard fallen list. Tom has a strong case.

The story doesn’t end there as, until this investigation, the church knew nothing of the name on the stone.

Now it has commissioned a correction of Tom’s surname and it is hoped that the change can be made this year, the 80th anniversary of Tom’s death.

I believe Tom Jewitt may have been one of the first Local Defence Volunteers to have been killed while on duty -— and on his first duty.

• The research was carried out by Sgt Mike Quigley and Pte Paul Chambers, of the Oxfordshire Home Guard Living History Group. Lest we forget.