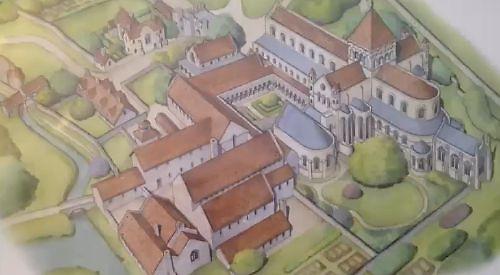 John is secretary of the Friends of Reading Abbey, who have worked to support Reading Borough Council’s efforts to restore the ruins to a safe condition in time for their 900th anniversary. The abbey was founded in 1121 by Henry I . At the time, it was believed that such acts would help the salvation of the soul and you would spend a shorter period in purgatory after death before moving on to heaven.

The site at Reading was chosen because it was, and still is, an important nodal point for travellers and, as Lord of the Manor, the King owned the land.

The town itself was then centred around the St Mary’s Butts area, where local markets were held.

It took 44 years for the large church to be built and it was consecrated in 1164.

The monastic buildings were erected in about five years and the chancel of the church had been completed by January 1136 as Henry, who died in 1135, had been buried there.

It followed the Cluniac tradition, the leading foundation in France at the time, but Henry insisted that it be a free-standing abbey and not a daughter of the French establishment.

Like most monastic houses, much of the income for Reading Abbey relied on religious relics that it held.

Pilgrims came to Reading to visit the hand of St James the Great in order to gain indulgences for their sins (and hence spend less time in purgatory).

It was considered an important relic as it had a direct connection to Jesus Christ, although the body of St James the Great, which is buried at Santiago de Compostela in northern Spain, has both hands,

Throughout its existence, Reading was a royal abbey and Henry made regular visits with his court.

This practice continued until the time of Henry VIII, partly as the abbey owned favoured hunting grounds to the south of Reading.

In Edward III’s reign, several royal betrothals and marriages took place at Reading Abbey and at times Parliament met there.

The abbot had become Lord of the Manor of Reading so he had control of the town markets etc.

Relations with the town guild over this issue came to a head in 1253 and the King then granted the rights to the townspeople but also reconfirmed the abbott as Lord of the Manor.

The abbott was thus responsible for selecting the Mayor, who was chosen from three names submitted by the guild. This process continued until September 1539, when the abbey became one of the last to be dissolved.

The last abbot was Hugh Faringdon, who refused to surrender to the Crown and so was hung, drawn and quartered in front of the west gate of the abbey precincts.

The abbey then returned to the Crown but, unusually, was not sold on. Henry VIII continued to visit and planned to convert it to a palace. Elizabeth I also came regularly.

The abbey church was not degraded, as many had been, although anything removable was taken out.

However, Edward VI gave the abbey to his uncle, the Duke of Somerset, who began to strip it of anything saleable.

The roof and the glass were removed, the bells melted down and the abbey church demolished.

Some of the stone was bought for the rebuilding of St Mary’s in the Butts.

Mary Tudor, despite being a Catholic, allowed the destruction to continue with the Lady Chapel being demolished to provide materials for building the Poor Knight’s residence at Windsor Castle.

Some abbey land was also given to St Laurence’s Church to create a burial ground, part of its surrounding wall being Tudor.

Reading Abbey had been built in the Romanesque style, with carved decorations typical of the time using stone from Taynton in Oxfordshire. The destruction of the buildings was comprehensive and much of the stonework was sold in 1549, many pieces being transported along the Thames to places such as Sonning and Shiplake, where examples were found in former in the 19th century.

Many other abbeys in the country were redeveloped over time and the surviving examples in Reading Museum are among the best in the country.

Despite the demolition, much still survives above ground (although not of the abbey church), such as the inner gateway, the mill arch and the hospitium (where guests would stay).

Elizabeth I was keen on developing the site as a royal palace and also gave Reading a new charter in 1560, which transferred the liabilities for roads and bridges to the town council.

The hospitium had been built in the 12th century to provide for visiting pilgrims and when that ended its dormitory was used to establish Reading Grammar School.

The corporation also used part of the building as the Guildhall from 1570 until new civic buildings alongside came into use in 1780.

During the Civil War, however, further destruction came to the abbey site as Reading was a strategic location.

Holes were made in the walls for gun ports and a mound was put up for another large gun on land on the north side.

At the end of the war, the land returned to the Crown and the abbey became a “delightful romantic ruin for 150 years”.

Now St Laurence’s Church survives as a town church, as does the hospitium. The civic buildings were extended in the 1870s with the town hall designed by Alfred Waterhouse.

The architect was George Gilbert Scott who was also responsible for rebuilding the abbey gateway.

The council had taken that over as well as the land to the north, which it made into a public open space as Forbury Gardens but the arch soon collapsed.

The rebuilt arch looked as George Gilbert Scott thought it should have. Unfortunately, for aesthetic reasons, he put the drainpipes inside the building and in 2010 they were found to have been leaking for a century, meaning expensive repairs were needed.

Nearby, St James’s Roman Catholic church was built from 1837 to 1840 in Romanesque style, the architect being Augustus Pugin. Inside, the font is formed from a stone from the chancel of the abbey church.

In 2009, the ruins had to be closed on safety grounds as there was a risk of large stones falling from the remaining structures. Once a solution had been found, and a Heritage Lottery Fund grant secured, the abbey grounds were
re-opened in 2018.

A “hidden abbey project” has been using ground-penetrating radar to discover what remains below the former prison car park.

The grounds now form a pleasant peaceful setting with information boards to explain what can be seen.