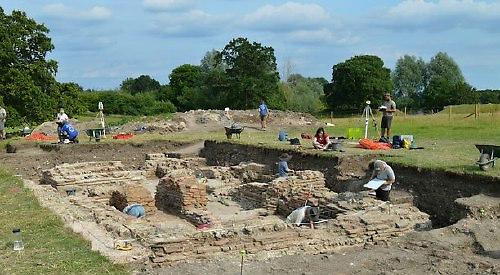 THE latest lecture to the Henley Archaeological and Historical Group was given on November 10 by Professor Michael Fulford, of Reading University, on the excavation of the bath house in the Roman town of Calleva, or Silchester.

No excavations have taken place during 2020 because of the coronavirus pandemic but the university hopes to resume them next summer.

The latest excavation continued the work done at the beginning of the 20th century and uncovered the earliest version of the baths.

These dated from the time of the emperor Nero, who ruled from 54 to 68AD, shortly after the Roman conquest, as evidenced by the discovery of a ceramic tile bearing his name.

The baths were set at a slant to the line of the Roman street, suggesting that they were originally aligned with the street in the original Iron Age town.

The baths were enlarged later but not without problems. The first heating system for the hot room did not work well and had to be redesigned with the furnace at the opposite end.

The baths remained in use until the late 4th century, shortly before the Romans left Britain.

Finds from this later period included a gold ring and an elaborate belt fitting, showing that some of the bathers were far from poor.

The next talk to the group will be given by our own Dr Michael Redley on “Public health and the growth of Henley in the late 19th century” on Tuesday, December 1.

This is a change from the scheduled talk, which was better suited to a live rather than Zoom presentation. Members of the group will receive a Zoom link by email in advance of the date.