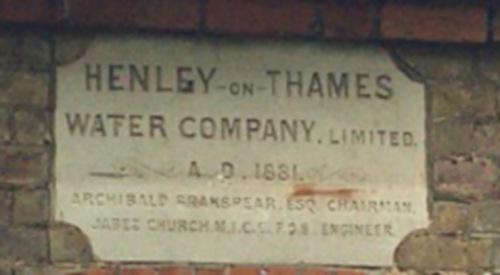 DR MICHAEL REDLEY, a member of the Henley Archaeological and Historical Group, gave a fascinating and well-researched talk on December 1 about the association of water supply and waste treatment with the growth of late Victorian Henley.

In the middle of the 19th century, the supply of water to households in Henley was through hundreds of wells.

Human and animal waste was disposed of into often unsealed cesspits. There were several hundred of these in the town, very close to the wells.

This led to serious health dangers, including a suspected high mortality rate among children, through contamination, as well as making the environment most unpleasant.

Public health acts demanded the establishment of local sanitation boards. Henley’s was created in the 1860s.

In 1882, private investors funded a company to supply clean water from the Chilterns. In the 1880s, sewers were laid to carry the town’s waste to a farm in Lambridge Wood.

This resulted immediately in a healthier town, although the problem of obnoxious smells remained. This was resolved in the mid-1890s by moving the treatment plant to Lower Assendon.

This made Henley a more attractive town to live in and to visit but the cost of the development was a significant burden on the town’s ratepayers.

Local developers, notably Robert Owthwaite and Charles Clements, were keen to expand the town, especially to the south, now that health issues had been addressed.

By the First World War, the increase in households spread the costs of sanitation over a larger number of ratepayers.

The next talk to the group will be given by Megan Aldrich, an authority on architectural and design history, about Augustus Welby Pugin and the Gothic Revival.