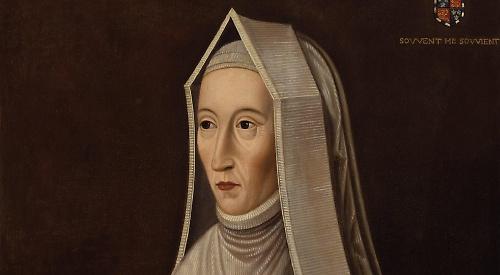 ON February 2, Dr Nicola Tallis gave a stimulating and thoroughly researched talk to the group about Margaret Beaufort, the “devout” and “awesome” subject of her book, The Uncrowned Queen.

Margaret was born in 1443, the daughter and sole heiress of the Duke of Somerset.

Her childhood was marked by a series of dramatic events — her father’s death when she was aged only one, her marriage (in word) to John de la Pole at the age of six, her full marriage on her 12th birthday to Edmund Tudor, the death of Edmund and delivery (at the age of 13) of her first, and only, child, Henry.

Things then began to improve for Margaret.

Edmund’s brother Jasper helped to arrange a marriage in 1458 to a man of her choice, Henry Stafford.

However, following the Yorkist victory at the Battle of Barnet in 1471, her son was forced to flee abroad and her husband died of wounds received.

Margaret remarried, to Thomas Stanley, who was close to Edward IV. However, following the death of Edward and the two princes in the Tower, and the accession of Richard III to the throne, Margaret worked with Edward’s widow to advance her son.

Henry returned to England and, against all odds, defeated Richard at Bosworth and became Henry VII. Margaret herself prospered, living alone (but on good terms with her husband), enjoying jewellery and expensive clothes, until she died in 1509.

The group will next convene for its annual meeting on March 2, which will include brief contributions by members.

On April 6 at 7.45pm Dr Ed Peveler will talk about the use of LiDAR technology to reveal ancient features of the Chilterns Landscape.