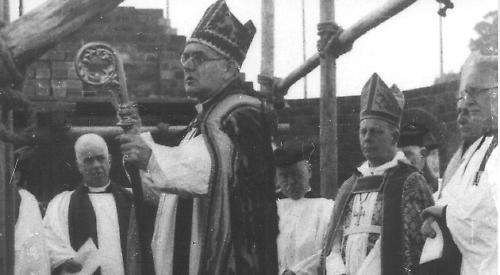 THE March meeting of Wargrave Local History Society began with the annual meeting.

The past year, when meetings had to be moved online, was reviewed, a committee elected and details of the 2021-22 programme were given.

Each month over the past year, the society has shared with members an item from its archive and following the formal part of the evening, society secretary Peter Delaney gave an illustrated presentation on the origins of the collection.

The society’s first chairman was the late Derek Bird, who was born and bred in the village.

He had gathered photographs and documents and made copious notes on the village’s history.

He kindly allowed copies to be made for the early local history exhibitions in the village and these were the start of the collection, along with others that were copied for the production of the Book of Wargrave.

An example is the one of the village fire brigade in 1931 outside their newly built fire station with W H Easterling (“The Guv’nor”) sitting at the front of the running board.

Derek’s notes also recorded the names of the firemen, most of whom worked for Easterlings and had built the fire station.

Sometimes, acquisitions have come from being in the right place at the right time, as with the next large part of the collection, which consists of photographs and some early documents from the Piggott School, starting with the laying of the foundation stone by the Bishop of Oxford in 1939.

These had been in store under the school stage but following an inspection by a fire officer, the area had to be cleared.

The society was able to rescue them and in due course all were catalogued and stored in safe material for archiving.

All kinds of activities are included — craft projects, animal husbandry, sports events, drama productions and school trips and there are around 300 photographs from this source.

In due course, the society was offered the postcard collection assembled by Derek Bird and his mother, Ruth. This comprised about 450 original items.

One shows the ferry at the St George and Dragon from the early 20th century.

The collection has been put into a dedicated archival quality album, preserving the same sequence that the Bird family had used for them.

The story of the next major collection of pictures takes us back 12 years to the society’s annual meeting of 2009, when two members asked if we might be interested in some old pictures of the village.

There were three albums and the images was relatively early as the Woodclyffe Hall (opened in 1900) was not yet there.

It turned out that these were the personal albums of Harriette Cooke Smith, Wargrave’s principal benefactress of the 20th century.

The society was very lucky to have been offered these. They had been seen by someone who recognised the word Wargrave and thought they might be of interest just before they were about to go into a tip in Northampton.

Although the archive has these large collections, many other items have come from a wide variety of donors, each in its own way interesting and often helping tell a story with items from other sources.

The collection includes a lot of things other than photographs, such as long runs of the parish magazine, which was first published in April 1861 and also a complete set of the Wargrave News.

There are also artefacts, including part of the B17 Flying Fortress that crashed at Wargrave in November 1943, which was retrieved from the River Thames in 2010.

Other items relate to various village businesses, such as receipts as trading accounts, that help record life in the village in times past.

The society is always interested to add items of village interest to its collection, to preserve them as a record of the people, buildings and events in the village.