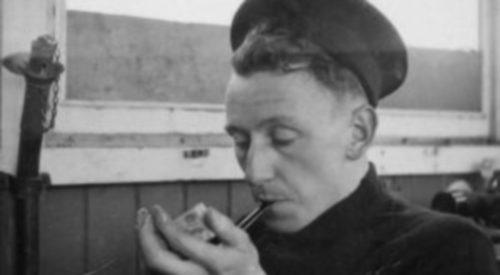 THE next Zoom talk organised by the Woodcote-based British Modern Military History Society will take place on Tuesday, May 4 at 2pm.

This illustrated talk by Mark Taylor is called “Ships, stars and isles” and is based on a collection of some 400 letters that his father Billy wrote home to his parents while serving in the Royal Naval Volunteer Reserve during the Second World War. Few of the men and women who returned from active service were keen to speak about it.

Mark father’s told him little. He had served in the Navy from 1939-46, been at Dunkirk and been awarded some medals but he never said much.

Mark was in his late twenties when Billy died.

More than 20 years later, Mark took early retirement. Anticipating some free time, he asked his mother to agree to let him research his father’s war record at the Ministry of Defence. Jean first met her husband Billy just after the war and she suggested that Mark might also like to look through a box of papers which had come from his paternal grandparents’ house.

Opening it, Mark discovered hundreds of letters which were written by Billy to his parents throughout the war, along with photos, documentation and various objects from his travels.

His parents had kept the letters and Billy had
re-inherited them on their deaths and Jean had kept the papers after Billy’s death in 1983.

As he read the letters, Mark saw that his father was a skilled and witty writer who had described a naval life, both routine and in action, from the Dover Patrol via the Dunkirk evacuation, for which Billy was awarded the DDM, Atlantic convoys, U-boat encounters, the invasions of both North Africa and France and ultimately the Japanese surrender in the Far East.

In that time, Billy rose from the rank of ordinary signalman to that of first lieutenant and served in shore stations as well as on converted trawlers, a paddle steamer, a corvette and two frigates in locations as far apart as Scapa Flow and Surabaya in Indonesia.

Despite the constraints of the censor and his audience, Billy revealed his thoughts as well as his experience.

Here was a complete story of Billy’s naval career, which was not only a valuable historical record but also a precious personal insight into his father’s life.

Mark felt sure that his father had wanted him to find them and that he should try to publish them.

He used the internet to find some of Billy’s shipmates and their families and tied in some of their memories and photos with his father’s accounts. He edited the letters and added nearly 200 footnotes following extensive research.

Mark has lived in South Stoke for 25 years and is married with two children and three grandchildren.

He worked in the finance industry, both in the UK and abroad, for more than 30 years before retiring in 2004.

We shall continue a monthly Zoom talk and look to resume live meetings as soon as we can and it is deemed safe to do so.