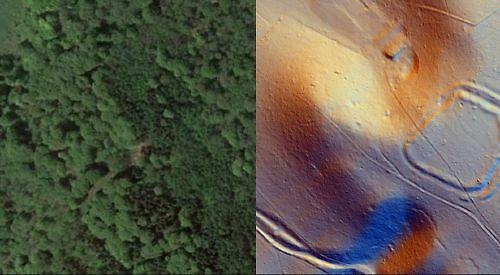 ED PEVELER, of the Chilterns Conservation Board, spoke to us on April 6 about the contribution of LiDAR (Light Detection and Ranging) to understanding the archaeological landscape of the Chilterns.

LiDAR uses an aircraft-mounted laser to detect small variations in ground level and thereby reveal archaeological features such as mounds, banks and ditches.

One very important feature of this technique is that it can “see through” tree cover to the ground beneath. This is particularly useful in the Chilterns, where 21 per cent of the area is woodland, about twice that for England as a whole.

About half the Chilterns woodland is “ancient”, or older than 1600, meaning that archaeology has been generally been undisturbed since the mediaeval period.

The technique was used to identify a Roman villa, a romano-Celtic temple and First World War training trenches on Berkhamsted golf course and a previously unknown Iron Age fort in Buckinghamshire.

Closer to Henley, the Iron Age forts of Medmenham and Danesfield are clearly visible, as are the Grim’s Ditch at Mongewell and pre-mediaeval fields in Harpsden Wood.

Everyone is welcome to join in interpreting the LiDAR images from the project. If you would like to help, just register at www.chilternsbeacons.org

The group’s next full talk will be on the dating of Henley’s buildings by our own Ruth Gibson. This will be given at 7.45pm on May 4.