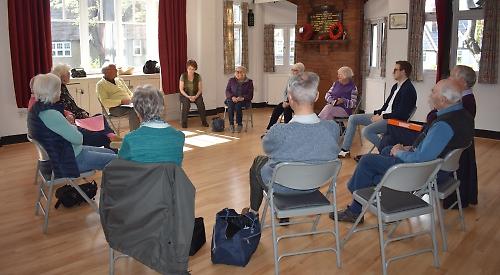 PLANS for a new singing group in Sonning Common are well under way after some members met last week for the first time.

Barry Wood, Clive Mills and Bernard Winnington decided to start the group after their previous group, Nottakwire, folded in November after 10 years.

Founders Margaret Moola and Elaine Williams decided to stop due to the threat of covid-19 to the 78 members, many of whom were elderly. Eleven members of the new group gathered at Peppard War Memorial Hall to meet their musical director, West End actor Sam Peggs, and to discuss plans for the future.

The first rehearsal will be held on Thursday, June 24 at the hall in Gallowstree Road at 1.30pm for a 2pm start.

It will be followed by afternoon tea and the creation of a committee to help run the group.

Members then hope to hold a concert in mid-August depending on the government coronavirus restrictions at the time. They will also have to agree a name for the group out of three contenders so far, Harmony, the VaryTones or the VarieTones, and New Tones.

Mr Wood, of Stoke Row Road, Peppard, said: “We absolutely loved Nottakwire and we gave concerts and so on and lots of people were involved for 10 years.

“We love fun and don’t do serious; we want challenges but a challenge through fun as we are in our golden years.”

Mr Peggs, who will remain in post for three months before returning to perform in Les Misérables in London, said: “A lot of the stuff I do is very serious, so this sounds fun because it’s a lot lighter and no one will kill you if there’s a mistake or something has gone wrong.”

Mr Peggs, who also runs a music teaching business called MasterKeys, will help the choir find a new musical director when he returns to London.