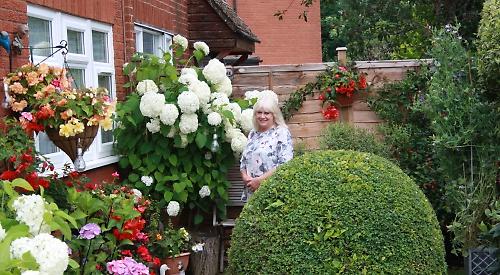 Teresa Johnson and Sally Horne, who both live in Crowsley Way, were among 25 entrants in the annual contest, which is organised by the Chiltern Edge Horticultural Society.

Mrs Johnson, who lives with her husband Peter, was a first-time winner. She planted a variety of perennials, hydrangeas and other plants to surround the ornamental well in the middle of her garden.

“I’m really quite surprised to win as there are a lot of lovely gardens but it’s nice to be acknowledged for it,” she said.

Mrs Johnson said she liked to make her garden look nice not only for herself but also her neighbours and the community as a whole.

“I used to work in a garden centre so it’s something we’ve always done,” she said. “I enjoy it and like to think I have green thumbs.”

Ms Horne, who came joint second, said she was delighted for her sister.

Her own garden, which is at the opposite end of Crowsley Way, is decorated with a variety of hanging baskets and potted plants as well as magnolias, hydrangeas and more.

“I love gardening,” said Ms Horne, who has won the competition previously. “It’s nice when people come past and say, ‘Your garden looks lovely’ and it’s uplifting.”

A total of 25 gardens were judged in four different categories: first impression; choice and variety; colour and layout; and general condition.

Sue Hedges, one of the judges, said: “Sonning Common is fortunate to have many well-cared for and attractive gardens which make it a colourful and cheery village to walk round.

“Peter and Teresa Johnson’s garden contains an interesting mix of perennials and annuals, including magnificent hydrangeas and colourful  borders and hanging baskets.

“A focal point is the ornamental well and everything is immaculately kept with not a weed in sight.

“Sally Horne’s garden is small but a real showstopper, featuring baskets and containers of begonias —   very bright and colourful.

“Like many of the gardens we looked at, Sally’s hydrangeas and roses were at their glorious best.”

Joint runners-up were Bill and Angie Cordell, of Bay Tree Rise, who won the spring garden competition in April.

In joint third place were Joyce Brewer, of Woodlands Road, and Jennifer Hawkins, of Beech Rise.