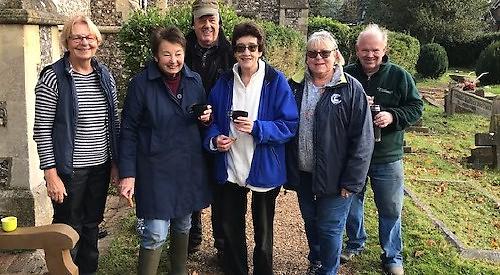 A GROUP of volunteers have created a record of all the gravestones in the churchyard in Kidmore End.

Six members of the congregation at St John the Baptist Church in Tokers Green Lane have been meeting weekly for the last two-and-a-half years to tidy up the graveyard.

Frances Brewitt-Taylor, who is musical director of the church choir, Sue Jones, Jill Pound, Shirley Horne, Nigel Crush and Brian Gardener decided to create a record of the names on the gravestones because many of the inscriptions were fading.

They divided the graves into quadrants to make the task easier. Mrs Jones, who lives in Caversham, said they feared that when the words had vanished altogether descendants would be unable to find the resting places of their relatives.

She said: “We realised that a lot of the names were wearing away so badly that they would be lost forever.

“The list is so that people can look up which section their beloved one is in. It has been a real labour of love.”

The volunteers have also cleaned the gravestones, removing ivy and cleared overgrown shrubs and bushes.

“It’s likened to painting the Forth Bridge,” said Mrs Jones. “We clear something away and something else grows so it’s a continuous, ongoing project.

“But we love it and enjoy each other’s company greatly, while doing our very best to make the grounds look spick and span.”

The volunteers have also planted spring bulbs and primroses.

Mrs Jones said: “It looks really beautiful. We don’t deliberately plant domestic plants but they sometimes spring up when people leave flowers for their loved ones and then we look after them and keep them under control.”

The group cleared away leaves at the church’s war memorial before the remembrance service on Sunday.