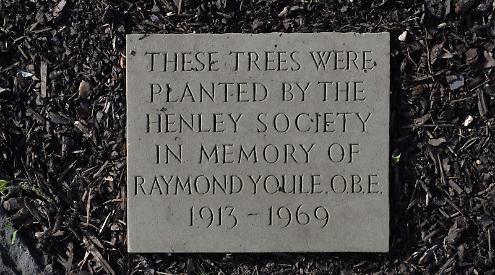 A COMMEMORATIVE plaque commissioned by the Henley Society more than 50 years ago has been restored.

The stone plaque marks the spot in Gravel Hill, where trees were planted in 1969 in remembrance of Raymond Youle OBE, who had chaired the society.

The inscription was barely legible under years of dirt and decay. It was restored by Kyle Dowling, head of the town council’s parks staff, with the help of a stonemason.

Geoff Luckett, the current chairman of the society, said: “It has cleaned up very well. Let’s hope it will be here for another 50 years.”

Mr Youle, who was 56 when he died, lived with his wife in Wharfe Lane and the couple were among the guests at a royal garden party at Buckingham Palace in July 1968. Otherwise little is known about him.

Mr Luckett said: “The society must have thought a lot of him to commission this plaque. I’ve tried to trace him through similarly named people but it came to nothing and none of the committee seems to remember him. Apparently he used to come up here and sit on the bench.”