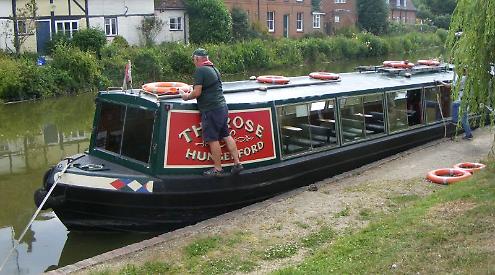 MEMBERS of Wargrave Local History Society enjoyed a visit to the Kennet and Avon Canal on a warm July afternoon.

This had originally been planned to take place in 2020, but had had to be postponed due to the pandemic restrictions.

Gathering on the canal wharf at Hungerford, the group travelled on the Kennet and Avon Trust’s Rose of Hungerford wide-beam canal boat.

Although the day was one of the warmest of the summer, the movement of the boat along the water created a gentle breeze through the vessel, making it probably the best place to be that afternoon.

The Rivers Kennet and Avon had been made navigable from Reading as far as Newbury and from Bristol to Bath respectively, in the late 18th century. Work began in 1794 to construct the 57-mile long linking waterway, being opened in sections, with the complete route through Newbury and Hungerford and Devizes finally opening in 1810.

A difficulty in working the canal, however, was that there is not an easy supply of water, particularly on the highest section near Marlborough, so a steam pumping engine was erected at Crofton to take water to the summit.

It takes about 60,000 gallons of water each time a boat goes through a lock, so this problem can still lead to the need to close the canal on occasions (even with modern pumps to help).

However, in 1841 the Great Western Railway opened between London and Bristol, and much of the traffic that had been carried by the canal was taken by rail rather than by boat.

The railway then acquired the canal in 1852, but reduced its maintenance, and increased the tolls charged to the boats using it. With the nationalisation of the railways in 1948, control of the canal passed to the British Transport Commission, but it was in a poor state of repair, and closed to through traffic in 1951, with a proposal to shut the rest in 1954.

However, a group of enthusiasts formed the Kennet and Avon Canal Association in 1951 to protest against the closure.

They saw the potential to repair the damaged sections, rebuild the locks, and clear the silted-up waterway, and so the Kennet and Avon Canal Trust began the work to restore the canal in 1962. The first section of the canal to be opened was that from Hungerford to Newbury, in July 1974.

Although it was to be 1990 before the canal was again navigable throughout, the Trust had the Rose of Hungerford built in 1982, and so could offer trips on the newly restored sections.

The boat is 55ft long — the crew may be volunteers, but watching them turn it round in the canal shows they are clearly expert at the task!

The society’s visit began at Hungerford wharf, the Rose of Hungerford then making its way under the road bridge eastwards on the first part of the canal to be restored.

Travel on the canal is very peaceful and calm and even though the railway runs close alongside on the south side, it hardly intrudes on the waterway, either visually or audibly. Approaching the first lock — Dun Mill — the road bridge just beyond looked to be too low for the boat to pass under but of course the water level is more than 5ft lower on the far side.

Although the mill itself is no longer there, the mill house stands alongside the canal just upstream of the lock.

The canal provided a natural barrier should invading forces land during wartime, and along its course is a series of pill-boxes — reinforced concrete guard posts for the military — and one stands close to the lock here.

An essential part of a Wargrave Local History Society visit is the afternoon tea, and our freshly made scones with clotted cream and home-made jam were served between Dun Mill and Wire Lock. Once through the latter, the boat went a short way further before turning round for the return to Hungerford — with a short wait at Dun Mill Lock for a narrowboat heading towards Newbury to pass.

Having passed back under the main road through Hungerford, the boat was turned round again for us to disembark.

Although ours was a special trip for society members, the canal trust also offers similar public trips at weekends and on Wednesdays — details are at https://rose.katrust.org.uk/publictrips/.

The delicious cream teas, though, are not served on these trips but are available at the Tutti Pole, close to the boat departure point.

More details of the society can be found at www.wargrave
history.org.uk or email info@wargravehistory.org.uk to confirm meeting details.