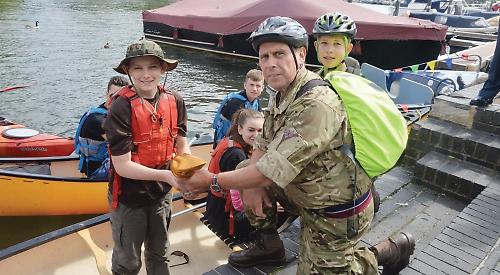 A TORCH to mark the 75th anniversary of the air training corps travelled through Henley on a tour of the UK.

The torch set off from John O’Groats in July and will end up at Land’s End.

It was brought into Henley on Sunday by cadets from Windsor, who travelled by bicycle.

It was then passed on to the Henley contingent in Friday Street, who took it on to Abingdon by canoe.

Slough squadron leader Stephen Senft, who handed the torch to 13-year-old Keiran Fell, said: “It’s going from area to area all the way across the country. It’s to celebrate our 75th anniversary, the cadets started on February 1, 1941.” The torch was handed over to a team of canoeists, who stored it in a backpack before setting off upstream.

They passed crowds of spectators on their way to Abingdon, where the torch was passed over to the Thames Valley Wing road marching team and taken to the families day being held at the volunteer gliding school at Dalton barracks. The torch is on a six-week tour across England, Scotland, Wales and the Channel Islands, using modes of transport including open top bus, boat and even rock climbing.

The relay will end at Land’s End so both the torch and a log of its journey can be deposited in the nearby Telegraph Museum.