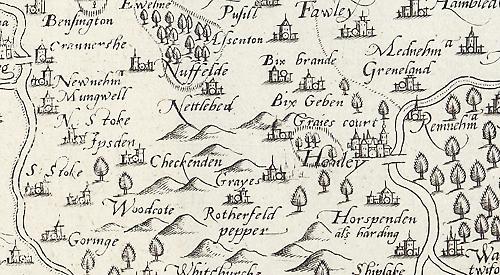 THE last full lecture of the year was given in November by the map expert John Leighfield.

This deeply researched, intriguing and informative talk covered the development of mapping from the earliest map in Neolithic Turkey to the present. The earliest map of Britain was produced in 150AD by Ptolemy. This was followed by a map by Matthew Paris in about 1250 and by the “Gough” map of about 1360, which is now in the Bodleian Library in Oxford.

The Gough map was astonishingly accurate for its time and showed major towns spaced in close agreement with their positions on modern maps.

The first printed map to feature Henley was a map of Berkshire, Buckinghamshire and Oxfordshire produced by Christopher Saxton in 1574.

The detail of this map was used for other maps of the area published up until the late 17th century.

Other printers used Saxton’s quirky spellings of place names in their own publications. Some even used the mysterious name “Quaere” for a number of villages.

This was, in fact, the Latin word for “ask” and was used to label villages whose name was unknown to the original mapmaker as a reminder to him to enquire further.

The provision of incentives and the wide availability and quality of surveying equipment and expertise led to great advances in mapmaking during the 18th century.

Greatly improved and detailed maps of the Henley area were produced by Jefferys in 1767, Richard Davis in 1797 and Bryant in 1823.

A mapmaking revolution took place in the 19th century with nationwide triangulation undertaken by the Ordnance Survey.

The OS produced a range of maps of scales from the familiar inch to the mile to the astonishingly detailed 10ft to one mile for major towns.

A further revolution is taking place in the 21st century with the extensive availability of satellite imagery and the emergence of Google Maps and the like. Who knows what the future will bring?

Our next lecture will be on January 3 when Professor Richard Fortey, an expert on ancient life, will be talking about Lambridge Wood.

On February 7, Jill Eyres will talk about “Life and death in a Roman villa: the story of Yewden, Hambleden Valley”.

Lectures are held in King’s Arms Barn at 7.45pm. All welcome, entry for non-members £3. For more information, visit www.henley-on-thamesarchaeologicaland
historicalgroup.org.uk