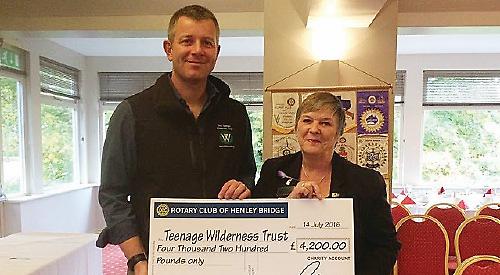 THE club presented a cheque for £4,200 to Matt Bailey, of the Teenage Wilderness Trust, on Thursday, November 10,

The money was raised at a James Bond-themed evening held in April at Badgemore Park Golf Club, when film director John Glen gave a talk about his work on the Bond films.

The Teenage Wilderness Trust supports students who find it difficult to engage with mainstream education and are often unable to cope, emotionally and physically, with conventional education environments.

Many of the children have experienced verbal and physical abuse or neglect and have never received the care and attention that children are entitled to.

The goal of the trust is to calm students and help them regain their self-esteem and re-engage them in learning.

The trust works with Path Hill Outdoors to step in before alcohol, drugs and crime become part of their lives.

Children are offered a range of courses designed to help them develop self- respect, respect for others and a desire to learn life skills. The courses offered include bushcraft and wilderness learning techniques along with practical life skills.

If students engage with the learning process it will give them a chance of a more positive future.

The money has been used to take two teenagers on a life-changing expedition to a remote part of Sweden, where there are no distractions.

There, they were free to express themselves and learn fundamental everyday lifeskills.

The teenagers found the trip a considerable challenge but felt they had benefited enormously from it.