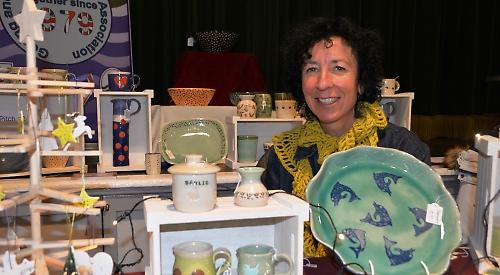 All the stallholders were from within about 10 miles of Goring and had made their wares themselves.

Tim Schulz and James Dawe, the former landlords of Goring’s Catherine Wheel pub, were outside the hall selling a hot mulled version of their cider BumbleBee, which they launched earlier this year.

Proceeds from the event, which are yet to be counted, will help keep up the twinning link between Goring and Bellême in Normandy. They may go towards an exchange visit to France next year.

Organiser Sue Lyons, of the twinning association, said: “It’s been very successful and I think we were a little bit busier than in previous years. We’ve had a lot of positive feedback from the stallholders and they feel we’ve really supported and promoted them.”

John Farrow, the chairman, said: “We’re hoping to get more young people involved in twinning next year. It’s a great way for us to develop a better understanding of each other’s cultures.”