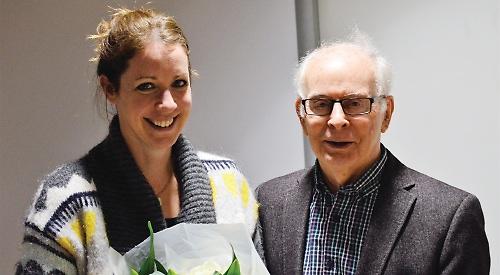 AUTHOR Cesca Major, from Pangbourne, addressed the book group of Henley’s University of the Third Age at the River & Rowing Museum on November 25.

She is the author of two novels and told the meeting that a third was on the way.

The first book, The Silent Hours, is about life in wartime France, which she was inspired to write after reading about a Nazi atrocity in a small village there. It was well received (“Major is a talent to watch” — The Times).

The second novel, The Last Night, seems likely to do well too.

Cesca told how her interest in writing began when she came second in a Daily Mail competition for the best opening paragraph in a novel. This was followed by success in several short story competitions.

In between these activities, Cesca, a history graduate, taught history at Bradfield College and then became a housemistress there. She is currently on maternity leave following the arrival of her first child, a boy.

Asked how she coped with looking after her husband, who is a busy vet, and a baby while writing novels, she said: “I’m a workaholic!”

The U3A book group meets once a month and discussed The Silent Hours at its October meeting, so members were delighted to hear from the author herself.

For more information about the Henley U3A, call Charles Whittaker on 07776 366168 or email xanadu212@gmail.com or visit hhtp://u3asites.org.uk/henley-on-thames