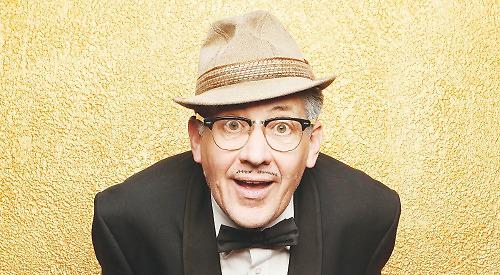 Bumbling variety artist Count Arthur Strong is going back on the road with dates in Reading, Oxford and High Wycombe later this month. BRUCE
DESSAU met his creator Steve Delaney

IT’S hard to believe that the smiling, casually-dressed man in front of me with an extravagant greying quiff is also Count Arthur Strong, the deluded trilby-hatted variety performer from Doncaster.

Yet Steve Delaney has been playing the character for more than three decades and, in recent years, has gone from cult to the mainstream with two acclaimed BBC series under his belt and a third due this spring. He is also about to embark on a huge UK tour.

You might think, then, that there’s a risk of the Count taking Delaney over, but it hasn’t happened yet.

“People are sometimes nervous about meeting me after the show,” he chuckles between bites of a ham and pickle sandwich at his home in Somerset.

“They think I might need time to unwind but I’m happy to talk and have a glass of wine straight away. I don’t have to warm up. I start doing it and I stop doing it. The 90-minute show feels like 15 minutes.”

The main thing he and his alter ego have in common, he claims, is their round-shouldered posture: “When I was at drama school in London my parents came to see me.

“I had a beard and a weird outfit on and was playing a torturer. I asked them if they spotted me and my mum said ‘I’d recognise those round shoulders anywhere.’ ”

Delaney is excited about taking the Count on the road with an all-new show, The Sound of Mucus.

The title is typical of this character’s oddball’s humour as Count Arthur has made a career out of getting his words mangled. He doesn’t do topical jokes. Or, as he would call it, “tropical” jokes. Things soon go wrong with hilarious consequences.

“Like all of Arthur’s shows its not the show he intends to give, but he thinks he is giving a pretty good account of himself,” he says. “It starts with the best of intentions and falls apart. That’s the essence of an Arthur live show.”

Delaney, who is a relatively youthful 62, doesn’t want to give away any spoilers but, as the title suggests, the show finds him attempting to revive the classic Julie Andrews musical The Sound of Music.

He plays, among other things, the Mother Superior and there is a version of Sixteen Going On Seventeen. However, Delaney concedes, things go so badly that we never actually see the main characters.

He claims it’s all done with love for the original, though. “It’s the only film I remember my father going to see. Everything I do with Arthur has to be from a starting point of affection.”

The cast isn’t big, but it is not a solo show either. Delaney is joined by long-time collaborator Terry Kilkelly as Malcolm de Tinsel and Dave Plimmer, who features in Count Arthur’s BBC One television programme as Alan Leslie.

But the Count is always centre stage when catastrophe comes calling — not that he will ever accept responsibility.

“It’s a defence mechanism. I think it’s a northern thing where if you make a mistake you blame something else — even an inanimate object,” says Delaney. “He always ends up making a fool of himself and being pompous, fiddling while Rome burns.”

The Count clearly thinks of himself as a jack of all trades but is undeniably a master of absolutely none. Take him seriously at your peril.

A previous show, Forgotten Egypt, was a misguided “Egyptalogics” lecture about the pharaohs. One fan missed the point and started pointing out factual errors, not realising that this was an essential part of the performance.

So how would Delaney describe the Count? He sips some tea to buy some thinking time before answering: “I’d phone someone up — I’ve got no idea!

“The thing I like is the way he has mistimed things. He got into variety as it was breathing its last gasp. He is always missing things by a few beats.

“He is about 73 and irascible and deluded. I can tell you what I take exception at is when it is suggested he has dementia. Old guys are allowed to be fools.”

Where does the Count come from, apart from Doncaster? He is an amalgam, says Delaney, of various people including one of his eccentric neighbours when he was growing up in the Leeds suburb of Harehills.

The Count’s anecdotes are peppered with references to old stars such as Vince Hill, Cliff Richard and Lulu, the kind of people Delaney used to watch on television on a Saturday night.

Delaney, as Strong, recently enjoyed the chance to record a version of the Frank and Nancy Sinatra duet Something Stupid with Sixties icon Anita Harris.

“I remember her from the telly when I was just old enough to appreciate her legs. She always got a mention in shows so to end up recording with her was wonderful,” he says.

The Count clearly touches a nerve in the nation’s light entertainment psyche as the sitcom is watched by millions and celebrity enthusiasts include Paul McCartney and Pete Townshend.

Delaney likes the fact that his performances are family-friendly and attract people from different generations.

He says: “There is nothing better than looking at an audience and seeing grandparents, parents and children together.”

His own son Alf, 13, is also a fan and recently lent his vocal talents to the Count’s Radio 4 series. “He used to listen to it all the time in bed, so had all the timing right,” explains Delaney.

His tour includes a date at the prestigious London Palladium, but it will not be his first time treading those legendary boards.

This Christmas he appeared there in pantomime, playing not a Count but a Baron – Baron Hardup in Cinderella alongside Paul O’Grady, Nigel Havers and Julian Clary.

He found it an odd experience as the cast was so big that he did not have a huge amount of time on stage and spent much of each performance sitting in his dressing room waiting for his cue.

“I’d been offered panto before but this was the perfect character,” he says. “It felt like an old variety show and I was fourth on bill. In a way I prefer to be in my own bubble, driving myself to gigs. I couldn’t wait to be back doing my own show.”

And that is exactly what he will be doing now. No wonder he has a smile on his face.

Count Arthur Strong: The Sound Of Mucus comes to the Wycombe Swan on March 29, the Hexagon in Reading on March 31, and the New Theatre Oxford on June 10. For more information and tickets, visit www.countarthurstrong.com