'Donald Trump? He's like Martin Luther King to me' 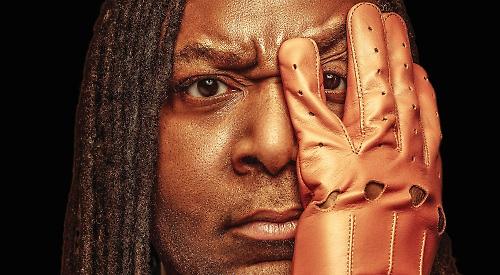 THE brilliant American comedian Reginald D Hunter admits that the election in November of Donald Trump as US President hit him like a 10-ton truck.

“When it happened, it took me two weeks just to get out of bed,” he recalls. “I thought, ‘What’s the point of anything? The law? Sex? Jokes?’ It made me feel so down. Not because I was scared of his economic policies or his out-there views.

“No, I was scared by thinking, ‘What does this mean for humanity?’ At this point, we thought we were pretty smart. But if people can be so easily duped and pitted against each other, are we really any better than Cro-Magnon man?”

There was another, very personal reason for Hunter — the D stands for Darnell — to be shocked by Trump’s election. With a wry grin, he says: “My new show was mostly written last autumn. Then Trump got elected, and I had to rewrite it very quickly.”

Never more than a minute away from the next joke, he adds with mock-sheepishness: “I’m almost ashamed to do stand-up this year. I spent the whole of 2016 repeatedly telling people that Trump was not going to win. I’m amazed they still let me do comedy!”

Hunter shouldn’t really be amazed. Born in Albany, Georgia, in America’s Deep South, but based in this country for the past 15 years, the 47-year-old is one of the most thought-provoking and thrilling stand-ups around.

This is something Henley Festival audiences know all too well, having been wowed by his his appearance last year (see story, right).

It’s unusual for any act to appear at the festival two years in a row, and Hunter will sadly not be on the bill this July. The good news, though, is that he is playing the Concert Hall in Blagrave Street, Reading, on Saturday, June 3.

The show — entitled “Some People v Reginald D Hunter” — enjoyed a sold-out preview at Norden Farm in Maidenhead on Monday and is about to start touring the UK, culminating in two night at the Shepherds Bush Empire on June 23 and 24.

Often provocative, always mesmerising, Hunter has audiences spellbound with his compelling brand of comedy. His potent, piercingly honest material has gained him an enormous fanbase that spans the generations.

You will no doubt be delighted to hear that Hunter is equally magnetic in person. Over two hours in a south London hotel lounge, he treats me to a command performance — to an audience of one.

He initially came to the UK at the age of 27 to study drama at RADA. However, Hunter ended up switching to comedy full-time after accepting a dare to do stand-up and taking to it like a duck to water. He hasn’t looked back since.

A regular panellist on Have I Got News for You, Hunter is a performer who can really set the pulses racing.

The Daily Telegraph has called him “stand-up comedy’s coolest customer”, while the Times’s critic opined that: “Reginald D Hunter joins the top rank of stand-up comedians working today ... a comedian going for broke, flying in the face of received opinion in a way that is simply exhilarating ... this is comedy of a rare scope.”

Hunter will be covering the waterfront in his new show, tackling subjects as varied as families, boyfriends and girlfriends and why the OJ Simpson case was “the pivotal moment in race relations in America — it is still sending shockwaves through the country today”.

But of course, Hunter will also be focusing on the man who is currently, for better or worse, capturing the world’s attention: Donald Trump.

Tall, imposing, and dressed all in black, the comedian observes that: “Trump is the elephant in the room, especially if you’re American. You’ve got to say something about him.”

So what will Hunter say about his new president?

“I’ll say I love him,” the stand-up jokes. “Not since Martin Luther King have I loved someone so much.”

If you’re thinking that might not be quite the full story, you’d be right.

“They really don’t know what they’re doing,” says Hunter. “At first, you were scared that they had some kind of master plan, like SPECTRE taking over the world. But no, they are just useless. Once revolutionaries get to power, they don’t know what to do with it. They didn’t realise how hard it would be and how scrutinised they would be.

“You can do what you
want when you just
talking to your people.
But you can’t when
you go outside your
circle and say things
to the media. You
can’t criticise the
people who have
been running the
country for
decades — the
Department of Defense, the Department of Justice and the CIA. They’re grown people. You can’t talk to grown people like dogs or children.”

So is he worried about what this most volatile of presidents might do?

“No. Trump has already offended so many different agencies in Washington that I get the feeling they will freeze him out. They’ll take his proposals and act like they’re stuck in some committee.

“I think they made that decision right after the inauguration. If the judicial and legislative branches don’t like what you’re doing, they can stop you. Just ask Obama. ‘Oh, your term is over now.’ ‘But I was just going to do that. Oh man!’”

Hunter will also be talking in the show about how he has been winning arguments against members of the
so-called “alt-right” on social media.

He says: “I’ve been engaging white American racists in debate on Twitter. I’ve been challenging their views. It has not been as upsetting for me as it has been for them! All you have to do to win is keep cool and state the facts — they hate that. It’s like holy water to a vampire! I figure if I can really argue my position with someone who despises the fact that I exist, then some of the places I’m visiting on this tour should be a piece of cake!”

Not that Hunter is planning to return to his homeland any time soon.

“I would have gone back 10 months ago. But then there was an uptick in the number of black people shot by the police. So I stayed in England a bit longer. It’s funny, but it’s not a joke.”

Besides, he is perfectly happy over here, thank you very much.

“Let me count the ways I love Britain,” he beams. “One of the things I love is that Brits come up to me and critique me to my face. They say, ‘I’ve seen you on Have I Got News for You and I’m on to you. You sit there as though you have nothing to say and then all of a sudden you pounce. I won’t tell anyone, but I know what you’re doing. It’s brilliant.’

Hunter’s humour has sometimes been seen as controversial. So does he deliberately try to provoke people?

“No. All you have to do is tell the truth and uptight middle-class white people will lose their minds. You don’t have to try and be controversial — just tell the truth. ‘My God, did he say that? That’s horrible!’ But in fact, in terms of controversy, I’m a watered-down lightweight compared to some of my family and friends!”

The stand-up believes that comedy can help to change people’s minds.

“Especially at the moment, we need people who can give sustained, articulate disagreement, and comedy is very much part of that. We can learn something from comedians that we can’t learn from our philosophers or politicians or intellectuals or clergy. If you animate a point with a joke, it really does sink in.”

As such, he hopes audiences emerge from “Some People v Reginald D Hunter” feeling a little brighter about the gloomy news headlines.

“I hope people will come away feeling less distressed about our current situation. I hope they can extract one or two methods to defend themselves against the rampant
me-ism that is going around now. I think that the alt-right and Trump and Brexit can only come about when there is a philosophy of me-ism, rather than us-ism.”

After a decade and a half performing over here, Hunter now has a huge number of loyal fans in this country. The proof of his enduring popularity is the fact that he is now garnering his second or third wave of fans.

“I love the fandom here,” he laughs. “Now the people who liked me before are annoyed by the neophyte fans coming in — ‘I liked Reg before he went synthesiser!’ ”

l “Some People v Reginald D Hunter” is currently touring the country. For more information and to book, visit www.reginalddhunter.com. Tickets for the Concert Hall show on Saturday, June 3, are £25 and can be booked by calling the box office on 0118 960 6060. The show contains adult content and has an advisory age of 18-plus. For more details, visit www.readingarts.com