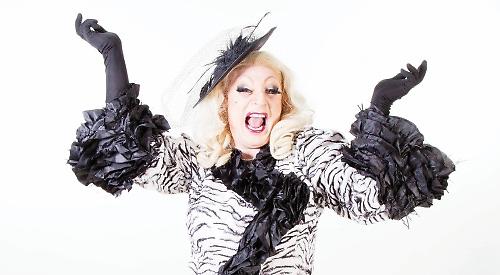 SHE may be billed on her tour posters as “Rotherham’s least celebrated daughter”, but cabaret artist Myra DuBois is fast winning over a new generation of fans.

Next Friday (April 21) she brings her signature brand of acid-tongued wit to the normally serene environs of Maidenhead’s Norden Farm Centre for the Arts — but it remains to be seen whether her most famous “AdMyra” will be in the audience.

Following a raucous appearance on The John Bishop Show on BBC One a couple of years back, Myra — and her creator Gareth Joyner — were contacted by Sir Tim Rice, who had been impressed by her rendition of one of his songs, which he described as “definitive”.

“It was my version of I Know Him So Well, which he saw me perform on the telly,” says Myra. “As to why he considers it definitive, I don’t know. You’d have to ask him, I suppose. I hear Elaine Paige is still gutted, though.”

The song from the 1984 musical Chess was written by Benny Andersson and Björn Ulvaeus of Abba, with lyrics by Rice.

First released as a single in December 1984, I Know Him So Well was a UK number one for Elaine Paige and Barbara Dickson, occupying the top spot for four weeks in 1985.

Sir Tim, who recently moved to the Hambleden Valley, was so taken with Myra’s version that he invited her to perform for him at a private dinner he was hosting in Mayfair.

If that sounds like a career high, it’s worth bearing in mind that Myra has performed all over the world and was once flown out to the Seychelles to perform for Saudi royalty.

A far cry from the South London clubs where she honed her craft playing to confirmed bachelors and their friends.

Today she is known for her unique brand of pointed humour, razor-sharp observations, songs — and maybe even a little dance if her hip is up to it.

A seasoned performer at venues both gay and straight across the country, her current “Self AdMyra” UK tour is the first actual theatre show she’s done — if you don’t count panto at the Royal Vauxhall Tavern and in Leeds. So let’s not.

To channel David Brent, is Myra enjoying life on the road?

“I bloody well do not enjoy life on the road. It’s lovely seeing new places and the tour is taking me to little corners of the UK I’ve never visited before, so that’s nice, and I’ve got a front room full of trinkets from all sorts of places.

“But I can say with my hand on my ample bosom that I can’t bear trains. They’re uncomfortable, overcrowded and overpriced. Although the sandwiches have improved, even if you have to give away your firstborn child to be able to afford one. I’m on a train right now, actually, which is why my distaste for them is coming across as fresh.”

Having wowed last year’s Edinburgh Fringe, Myra is playing some big venues on this tour, with dates at the Brighton Komedia (April 22), Manchester Dancehouse (April 28) and Newcastle Boulevard (May 15). But does she not prefer more intimate spaces where she can see the whites of the audience’s eyes — and their fillings?

“Both are enjoyable, although I can’t deny the thrill of working a big room when it’s full of my little AdMyras, which is what I call my adoring fans. If Lady Gaga can have her little monsters then I can have my AdMyras. I played St David’s Hall, Cardiff in February, which was a fabulous experience. Two thousand people laughing at my jokes! The adrenaline was so electric that I felt as if someone had thrown a plugged-in toaster into my bath the night before!

“I do enjoy smaller rooms, though — you get to know the audience very personally. It becomes more of a bespoke show for them. Which makes them very lucky, don’t you think?”

It sounds as though Myra likes to “take the temperature” of the places she plays. “You do have to research where you are, yes. It pays the audience a compliment to spend some time investigating what interesting things inhabit their lives.

“If they hear you bring up local areas or news items on stage then they’ll know you’ve put the work in to tailor the show to their town.

“And to be honest, it makes it more interesting for me as well to be able to chat about things in the area with my audience, as it keeps each show fresh for me.”

With that said, and her audiences with Sir Tim and the Saudi royal family already behind her, where in the world would Myra most like to play that she hasn’t already?

“I tell you what, though — there isn’t a single person working in showbusiness that wouldn’t love to tread the boards of the London Palladium. If you got me on that stage you’d have to use a hook on a stick to get me off again.”

Sunday night saw Myra playing the main house of London’s Leicester Square Theatre — so maybe her dream gig isn’t all that far off.

Now a cabaret artist, Myra describes herself as an “actress, singer and former barmaid” who still likes to include the odd musical number in her shows for good measure (hers is a double, if you’re asking).

As a performer she started out at the legendary Soho nightclub Madame Jojo’s as an MC for Finger in the Pie Cabaret and starred in the Royal Vauxhall Tavern’s annual Christmas panto from 2010 to 2014.

What character did she play in panto, or is that a dame stupid question?

“I’ve been in a few adult pantos and usually play the villain, which I think is the most fun to play and it’s especially enjoyable when you hear the audience booing each time you come on stage. Oh yes it is.”

Panto audiences booing is one thing, but what’s the worst thing a journalist has ever written?

“I’ve never had a bad word written about me in the press that I’ve seen, but I have been sent some stupid questions by journalists before now.”

Point taken! Speaking of the fourth estate, are you sick of all the news stories about Brexit and Trump yet?

“Yes, I’m sick of hearing and talking about it. They should just keep things as they are and tell people who voted for Brexit that it’s happened as they’d probably believe anything. And as for Trump... well, I’m too much of a lady to say what I think about him.”

For their part, reviewers haven’t hesitated to say what they think. Time Out praised Myra’s “effortless control of a room” and “killer wit with a sick edge”, while The Skinny lauded her act as “a viciously funny attack on decency” and the Edinburgh Festivals Magazine called her “hilarious”, flagging up “comedic timing that never misses a beat”.

Perhaps most impressively of all, WhatsOnStage called Myra’s control of a room “hypnotic”, adding: “[It’s] so endearing that audience members have apparently been known to lay drinks at her feet like tributes to an ancient god.”

So, Myra, when did you first realise you were fabulous enough to be on stage?

“As a little baby I played Jesus in a church play and screamed the place down when they nailed me to that cross. I showed great potential very early on.”

Finally, as a woman of great experience, what top piece of advice would you give to our readers before they come to see your show at Norden Farm?

“Pop to the bar and make sure you’ve had a drink. It’ll go better for both of us that way.”