Comedian is half-Welsh, half-Spanish, all funny... 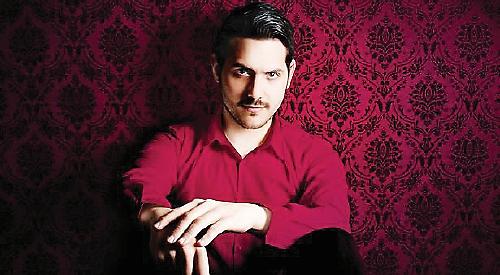 THE UK’s only Spanish-Welsh comedian is coming to the Kenton Theatre next week — and he’s bringing his friends with him.

Ignacio Lopez is headlining Comedy at the Kenton on Friday (April 21), the second in a series of regular stand-up nights at the New Street venue organised in partnership with comedy promoters Avalon and Henley’s Hotel du Vin.

The 30-year-old has come a long way since his national TV debut back in 2011 on reality talent show Show Me the Funny, which came just a year into his career as a comic.

Billed as a Latin lothario, he got laughs from the all-female Liverpool audience with cheeky lines like: “Just turn to the woman on your left and ask her for my telephone number. Statistically speaking, she will have it.”

But his loverboy act ultimately fell flat as he became the first of the 10 contestants to be eliminated from the ITV show.

“We filmed it in April 2011 and it went out in July,” he says. “I was only in one episode. I was the first out, so technically I’m the loser of Show Me the Funny.”

Today he is sanguine about the experience, having more than found his niche in the intervening period.

On the morning I telephone, Ignacio has has just finished filming some sketch material for the web. He has written — and continues to write — for both radio and TV, but says his passion is very much for live comedy.

“That’s where the fun comes in, for me — the live experience. I mean, things happen on those nights which will never happen again. Like, in a million years. You know, the stars align and something is said off the cuff that only works in that environment to that audience, those people. It’s a shared experience so it can be quite magical, that kind of comedy environment.”

It was in one such club that Ignacio — the son of a Spanish father and a Welsh mother who shuttled between both countries growing up — first got his start in stand-up comedy.

Unsurprisingly, you might think — but at the time he was there as a jobbing musician.

“I’d been to university, I’d done a course in film and video production in the UK and and then I was doing freelance film and video work — and also in the evenings I was playing a lot of music, doing singer-songwriter gigs in different venues, and that included a comedy club in Swansea. I just remember seeing a lot of comedians while I was doing that job. And, you know, I said, ‘I could do that — I could give it a try.’ ”

Ignacio still plays guitar and says he usually does a couple of comedy songs at the end of his set.

His Kenton show aside, he has just started touring his new solo show, which is called “EspañYOLO”.

On his Facebook page “Comedy Lopez” he describes himself as being “Half-Welsh, half-Spanish, all funny.” So what sort of comic is he?

“Well, my favourite comedians are the ones who can kind of play to any audience, so I try and sort of jam as much comedy in as possible — just so that everybody leaves feeling they’ve had their money’s worth. Everyone’s entertained in some way — I like to put something for everyone in there. So I throw some topical stuff in, but everyone on stage — every comedian — is an exaggerated version of themselves. So a lot of it is autobiographical.”

While he does write for other comedians and sells some of his jokes and one-liners, Ignacio is adamant that his best material is kept for himself and his own show.

“Yeah, because the best material is personal. So like everything I write about is all either stuff I care about or it’s things that have happened to me — and like nobody could pinch those jokes because they only work for me.

“I’m talking about my life and what’s happened to me when I go up on stage. I don’t know a single Spanish-Welsh comedian on the circuit apart from myself, so if I talk about that then you’re only going to hear and experience those stories and those jokes at my show.”

Ignacio’s approach to performing is all about establishing a connection with the audience. Next Friday’s show at the Kenton is called “Ignacio and Friends” and for the comedian that means everyone in the room.

“How do people make friends?” he asks. “Most often it’s the sense of humour that you create with your friends and with the jokes you come up with — that’s very much how I see it. You do a show and afterwards people are laughing and joking and come up and talk to you and you feel like you’ve known each other for a long time because you’ve let each other into your worlds and, you know, you leave a stamp.”

Despite or perhaps because of his success as a performer, his worst gigs are one of the topics he discusses in his act.

“The more experience you get — it’s very rare now for me to go up on stage and die, and have a bad gig. I’ve got all these various tricks of the trade — jokes that can work with different rooms and different people — so I can usually get myself out of trouble if that ever happens.”

Cumulative experience counts for a lot in comedy, it would seem.

“You look at every comedian, they will only get better with age. Billy Connolly — who’s, you know, a massive influence and a very talented individual — he’s only gotten better and more comfortable with being on stage. It’s one of those things — it all comes with experience.

“No one was incredible at their first ever gig. And no one was the finished article in their first year of doing stand-up. Which I think with Show Me the Funny, that proves it — I’d been going for one year and that was a disaster for me, you know? That’s what happens — you learn, you adapt, and you meet a lot of cool people along the way.”

One of Ignacio’s fans is the woman who booked him — the outgoing Kenton general manager, Zsuzsi Linday, who had previously worked with him at the Reading Fringe Festival.

She said: “We’ve known him for probably six years now and he has always consistently scored really highly with our audiences. He always scored 10 out of 10 from the audience feedback. He’s a fab guy and he’s got a really good set.”

l Tickets for “Ignacio and Friends” are £13 for the comedy alone or £25 including a pre-show burger over the road at the Hotel du Vin’s bistro. Stage time is 8pm and the show runs for 90 minutes, including an interval. To book, call (01491) 575698 or visit www.kentontheatre.co.uk