Christianity's no part of my Brand, admits Katy 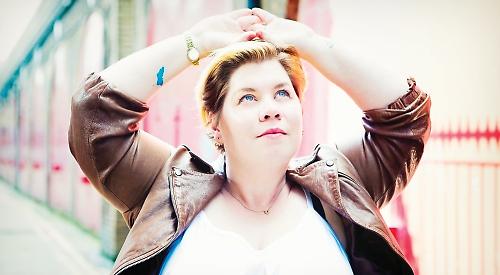 “I WAS an obnoxious, self-important dick, but at least I knew I was going to heaven.”

Slight paraphrasing aside, that’s how the comedian Katy Brand pitches her first ever stand-up show — the gloriously autobiographical
I Was a Teenage Christian.

The daughter of Jo and sister of Russell — just kidding — it’s hard to believe it’s almost 10 years since Katy was being hailed as the new Catherine Tate following the success of Katy Brand’s Big Ass Show on ITV2.

The show ran for three series, winning her a 2008 British Comedy Award for best female newcomer and making her name as a TV sketch comedian.

However, like Catherine Tate before her, Katy decided that three series was quite enough, thank you, with the last episode being broadcast in October 2009.

The following year saw her take the show on a tour of UK theatres before channelling Beyoncé to compete in the BBC’s Let’s Dance for Sport Relief — where her performance piece was Single Ladies (Put a Ring on It).

But while Katy is still revered for her impersonation of celebrities as diverse as Lady Gaga, Angelina Jolie, Adele and Kate Winslet, with her new stage show she is finally stepping out of the shadow of those characters to perform as herself.

I Was a Teenage Christian tells the story of how one Sunday a quarter of a century ago the 13-year-old Katy went to a local church service and became a fundamentalist Christian.

From then on she attended church up to five times a week, revelling in the sense of certainty and judgement her evangelical faith afforded her.

She knew she was going to heaven. Now, however, she’s not so sure.

A gifted student, it was while studying at Keble College, Oxford, that Katy came to realise that “things are never as simple as they seem when you are 13”.

Today she says: “I started doing a theology degree and that was what got me out of it, ironically. I began as a Christian and ended it not a Christian.”

More on which later. To go back to the beginning, it was a summer holiday in St Ives, Cornwall, with family friends who happened to be evangelical Christians, that sowed the seeds of Katy’s conversion.

“We sat on the beach all day and all evening talking about God, which was probably a bit odd,” she laughs.

Katy’s holiday companions were two children her own age and their mum who, she recalls, had “got very into the church”.

“It was quite sudden, because I hadn’t really been religious before. I just happened to be going on holiday with them and it was all we talked about for the whole week, so they invited me to come along when we got back, and I did, and it was sort of immediate from then on.

“I had a kind of weird spiritual experience that night and also immediately fell in love with the worship band leader — in that sort of 13-year-old way — and was pretty much into it from then.”

Katy’s own parents were distinctly non-religious, and she says of her
out-of-the-blue conversion: “It wasn’t anything to do with my family — it was just me, really.”

Now 38 and the mother of a young son, the story of her Christian years is one she seems to have waited quite a long time to tell.

“It sort of sounds ridiculous, given that I’m doing the show now and that I had so much content that I could put into the show once I started to think about it, but it hadn’t occurred to me to do a show about it. When I first started doing comedy and I did live comedy, I did sketches. I used to write religious characters — I did a bad nun thing and I did a sketch about Jesus’s girlfriend — so religion sort of came out, but it just didn’t occur to me and I didn’t do stand-up, so it wasn’t like I was going to tell my story as me at that stage.

“And I suddenly thought, ‘Oh, I’ve got a story as well — I’ve got quite an interesting and unusual story about my teenage years. Oh, I should try some stand-up!’ I sort of felt I was ready.

“Just before that, in the couple of years before that, I wrote a book about a woman who becomes a
stand-up comedian — a novel — and I did a book tour. And that was the first time I’d really sat on stage on my own and talked to people as myself. So I think it’s as a result of that that I thought maybe I could try this.”

I Was a Teenage Christian was first performed at the Edinburgh Festival Fringe last year. The Times hailed the show’s “intelligent storytelling” while the Evening Standard noted that “the church’s loss is comedy’s gain”.

The show’s success led to plans for a UK tour, which began earlier this month and runs until the end of June.

Dates include Norden Farm Centre for the Arts in Maidenhead on Saturday, June 10, and the New Greenham Arts Centre in Newbury on Thursday, June 15.

“It was a bit of an experiment doing the show at Edinburgh last year because it wasn’t the type of show I normally do and I wasn’t sure how it would work. So I was really taking it one day at a time — I mean, literally, I was learning how to be a stand-up one day at a time, it felt like.” With her 2014 debut novel Brenda Monk is Funny already to her name, Katy has been approached by publishers interested in turning her current show into a book.

“I’ve had some meetings with people about the possibility of a book based on being a teenage Christian. Which could well be a memoir — I can definitely see how that would work — but also possibly a fictionalised version. Maybe even a young adult novel. I feel like there’s quite a lot of possibilities.”

Before she writes any more books, though, Katy is heading back to Edinburgh in August with a new show called I Could Have Been an Astronaut.

“Rather than what I was, it’s about what I could have been if I’d been better at maths or if I’d had some sort of amazing, inspiring maths teacher. [It’s about] the way our lives are defined as we go along and then moving into kind of the weirder bits of space, like parallel universes. Like, maybe I am an astronaut in a parallel universe?”

A parallel universe in which she wasn’t a teenage Christian, presumably.

Looking back at her precocious schoolgirl self she says: “I wasn’t especially studious. I was quite headstrong and I liked showing off and I liked having a purpose.

“Part of the appeal of my church was that it gave me all these opportunities — to sing in a band and preach, and I would take full-school assemblies.

“I liked to have a drive forward. That’s what I think I liked about the church, was that there was always some sort of mission or something going on, something you could throw yourself into or help organise — and that was definitely my temperament, definitely. I responded to that. We did practical stuff and cool stuff. It’s just, you know, I think at the point at which I started getting involved in exorcisms I started to think it was a bit much. For a bit of a social life, I have to do this? It was a bit ‘I’m not sure about this.’

“The church was getting a bit strident with trying to ban things — they were trying to ban books, like Harry Potter and stuff, and I just started to feel that wasn’t really anything I wanted to be involved with.”

As Katy makes clear, though, I Was a Teenage Christian isn’t intended as an attack on anyone’s beliefs. Rather, is the story of how she slowly but surely fell out of love with her church.

“It’s definitely not a debunking of Christianity, this show — it’s very much about my teenage obsession with my church, and Jesus, and the worship band leader.

“Sometimes it felt like the faith thing became almost secondary. So when I got to university and I started challenging it I was a bit fed up of my church and they were a bit fed up with me — I think they thought I was a bit of a troublemaker by that point.

“And so it was almost like I had something to go to. I started doing comedy at Oxford and suddenly my world just expanded and I couldn’t find any place for this church that, you know, wanted to shut down people or free conversation and was very socially conservative.

“It just suddenly seemed like, ‘What the hell am I doing here? This is really weird, this isn’t me at all!’ And so it was a kind of slight identity crisis, I think, but I really threw myself into everything at university — and then that was the life I wanted.”

Today, having had time to reflect on all this, would she describe herself as any kind of Christian at all?

“No, I would not say I was a Christian, and I don’t think a Christian would say I was either. But I’m not an atheist, so I — I’m not some sort of really staunch atheist like some of the kind of people in the media that are really fundamental atheists.

“I like the mystery of it and I like the spiritual side of human life and things that as yet are unexplained. You know, I’m not sneery about religion at all — I’ll still have a good debate about religion if someone feels like it. But I’m definitely not a Christian.”

I Was a Teenage Christian is recommended for ages 16-plus. For a full list of tour dates and to book tickets, visit www.mickperrin.com/
tours/brand-teenage-christian