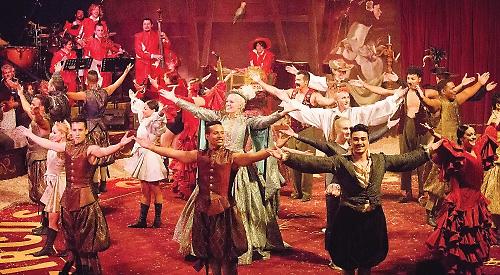 WELL, Giffords is no ordinary circus. This simply oozes class, features exceptional talent and is just mesmerising throughout.

Arriving at Stonor Park, it felt like I was stepping back in time to a simpler era, but also a period of magic and mystery.

It is Gifford’s first visit to Stonor and I very much hope they will keep it in their summer touring schedule — it was the perfect location, and with sold-out performances the crowds obviously approved.

Each year the show has a different feel. This year, it is a sea theme with a Spanish flavour combined with a Royal Tudor Court full of luxury fabrics and indulgent colours.

Quite a melange of ideas, but it was as intoxicating as it was a delicious visual feast. It was a multi-lingual, multi-national group of performers, but very much a true team, and despite the circus growing from a small, village green tent up to a 500-seater in the last few years, they have managed to retain an exclusive, intimate feel.

There are so many preconceived ideas when it comes to circus, and a lot of negative publicity about the animals particularly, so I was delighted to have those all put aside.

The horses were happy and healthy, their display only limited by the small performance space, and even the chickens were obviously adored by the team. (Yes, this circus has performing chickens!) And there were no caged, wild animals in sight.

The production detail was very theatrical. The live band were excellent and underscored the evening with an infectious groove throughout and every costume was intricately detailed.

There were clowns, but not your standard, red nose, big shoe, flower-squirting variety — these were the engaging, clever, acrobatic kind. Daft enough to delight the kids, funny enough for the parents to enjoy. Send in the clowns, indeed.

The stunt team were exceptional, intermittently performing daring tricks and filling their down time with a variety of salsa moves.

When one of the team had two men standing on his shoulders and a girl was then swung up to add on top, I was beyond impressed. She even kept her salsa wiggle going when she was up there!

It is slightly bizarre that a show with an opera singer, a pet kettle called Keith and some Austin Powers chickens can be so magical and elegant, but it certainly was.

At the age of eight, I decided to run away to the circus. It was only a matter of hours later, cluelessly wandering around Henley, that I realised I didn’t know how you did that.

But sitting munching on my candyfloss, watching Gifford’s fantastic team in action, that childhood dream was certainly reignited.

Adele is a fan, Helena Bonham-Carter is a fan, and you can count me in as well.

Giffords Circus is touring until September 24. For more information, including a full list of venues, and to book, visit www.giffordscircus.com