Comedian won't be sitting on the fence 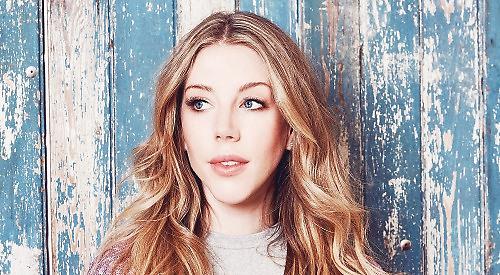 EVERY year seems to be busier than the one before for the London-based Canadian stand-up Katherine Ryan, but she’ll have to go some to top 2017.

Among her achievements over the past 12 months was becoming only the second UK-residing comic to have their own Netflix stand-up special (the Hammersmith Apollo-filmed In Trouble).

Meanwhile, her TV profile has risen further by helming Channel 4’s How’d You Get So Rich and co-hosting Comedy Central’s Your Face or Mine in tandem with Jimmy Carr.

But now she’s set to take her place back on the nation’s live stages by kicking off a brand new national tour with Glitter Room — her first live show since the majestically successful Kathbum, which enjoyed a pair of
sold-out runs across the UK.

Oh, and they’re beginning to see the light in the US as well, where she performed some stand-up on Conan O’Brien’s influential late-night entertainment show, while a couple of years back she appeared in her homeland at Toronto’s Oddball Festival with Aziz Ansari and Amy Schumer as headliners.

“I do a lot because I’m a very gamey person, so as soon as anyone offers me something ridiculous like ‘Do you want to dance on this special charity show?’ I’ll say yes,” admits Katherine.

“It’s not because I say yes to everything, just that I love to do different things and I have a very fun job. What I don’t have is a social life, so friends will say let’s go and do this or that or have a weekend away.

“But if I’m not working, the key is to spend as much time as possible with my [eight-year-old] daughter Violet and just be home doing absolutely nothing.

“In Japanese, they talk about ‘ma’, the space in between clapping that’s emptiness. It’s important in life to have some nothingness and that’s what I need to have when I’m not working.”

Katherine’s hard work is definitely paying off, though, as she’s steadily climbing the ladder to the top of the UK stand-up tree. Hopefully she doesn’t suffer from vertigo because Glitter Room is only going to take her yet higher.

Obvious question: what the heck is the glitter room?

“It’s about this little thing that Violet said which encapsulates how charmed my life is now. I bought a flat, which is quiet and peaceful and clean and floral and we have these tiny little dogs — everything is a warning for a man to stay away.

“The other day Violet said [adopts well-spoken English accent] ‘Mummy, if you need me, I’ll be watching Mean Girls in the glitter room’. I have this life that I never pictured for myself. I grew up in an Irish Catholic family in Canada and thought I would have a normal family life. Instead I have a glitter room.”

As well as being a very personal show about her own career trajectory and life development, Katherine is hoping to hit upon some universal truths with her material. “Whenever you try to broaden your audience with something like a Netflix special, you have to talk about themes that are relatable to others. So this show is a lot more universal, about my life as a single mum and as a woman in this century who is questioning what kind of life I need to have.”

One of the things people who have seen her live work will immediately associate with Katherine Ryan is a
pin-sharp analysis of pop culture and of the celebrities who populate the glossy magazines and plasma screens.

She is renowned for her no-nonsense takedowns of the likes of Cheryl Cole, Peter Andre and Oscar Pistorius, but she admits to taking a slightly different perspective in Glitter Room on that level of celebrityhood.

“I do love a comedy roast — it’s a language that people in comedy can understand, but some of my old stuff was heard by the celebrities that I was talking about and, you know, I don’t want to hurt anyone. It turns out I do actually have a conscience!

“Comedians can be provocative but I know that they don’t want to hurt people, they’re just trying to make things lighter and funnier. I will still talk about the Kardashians, but in a less negative way. Maybe I’m just getting wiser.”

Wiser maybe, but no less funny, thankfully. Both of those attributes were to the fore in her recent Channel 4 series How’d You Get Rich, where she met up with some stupendously wealthy individuals. Did she take any life lessons away from making that programme?

“When you look across your block of flats to these mansions and you think ‘Oh gosh they must be special and smart’ — but the thing is, they’re not special. They have a very strong work ethic and they take risks but they aren’t that different to you or to me. A certain level of self-belief and commitment to your goal will take you a very long way.”

For now, Katherine is putting some of her TV work on hold to get back on the road and entertain the nation’s many fans of live comedy.

“I’m excited to be touring again. People ask me if TV or touring is more important and I just think that you can’t have one without the other. Comedy is a conversation and it’s good to see other towns on a tour. I just hope that people like me and don’t get sick of me for a few more years.”

No chance of that, Katherine.

• Katherine Ryan plays the New Theatre Oxford on Saturday, November 11, and the Hexagon, Reading, on Friday, March 2. For more information and to book tickets for Glitter Room, visit www.katherineryan.co.uk