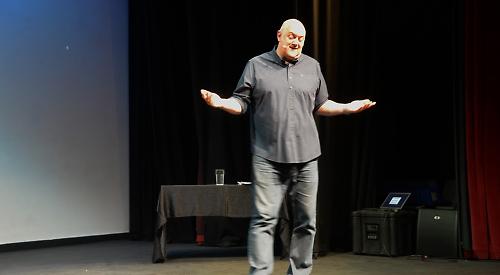 DARA Ó BRIAIN took aim at fake news, parenting and bike thieves when he performed to a sell-out audience at the Kenton Theatre in Henley on Sunday.

The Irish comedian, best known as host of BBC 2 panel show Mock the Week, was performing a preview show for his upcoming Voice of Reason nationwide tour next year.

Ó Briain took to the stage in trainers and jeans after announcing himself over the tannoy and held printed notes as he tested new material.

He even held up a copy of the Henley Standard at the start of the show as he made some quips about the town. Among the audience was former T-Pau singer Carol Decker, who lives in Henley. After the show, she tweeted: “Thank you for a top Sunday laff. Cried my mascara off laughing.”

Ó Briain replied: “What?! I came this close to you finally explaining the lyrics of China in Your Hand and you just left?!”

The comedian had arrived in the town more than two hours before the evening show and ate at the Da Luca restaurant in Market Place.

He will perform to another sell-out audience on Monday.

Ó Briain previously visited the town in 2006 while filming for Three Men in a Boat along with Rory McGrath and Griff Rhys Jones.