Perrier winner isn't about to water his act down any 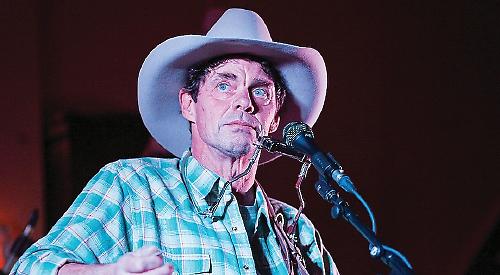 WHEN the comedian Rich Hall says “I love being on stage,” you know he’s not kidding.

“I love the fact that when a live show is over, it’s gone,” he adds. “It’s happened and it will never happen like that again. It can’t be replicated. That’s a great magical moment.”

Hall makes no bones about the fact that he thrives on the unparalleled spontaneity of live comedy.

“In every single show there are always two or three moments when I’m thinking ‘Wow, where did that come from?’ You’re constantly thinking on your feet.”

One of the hallmarks of his act — no pun intended — is that he goes out of his way to find out about the place he is playing — then improvises a song on stage about it.

“I try to tap into what is happening locally and address that musically by writing an improvised song based on the town I’m in.”

“Once they realise you’re not just trotting out your regular act, people think, ‘He’s made a real effort — he’s on our side, so we’re on his side.’ Then you can take them anywhere.

“I like to do something custom-made every night, otherwise you would just be like a robot. That can really wear you down. Nobody gets more sick of hearing their own voice than a comedian.”

Hall, who has also enjoyed huge success as his country and western musician alter ego Otis Lee Crenshaw, adds: “When you’re improvising a song you think, ‘I may never do this one again, but it’s a special moment for everyone here.’

“You want to reach the point where audiences say, ‘I’d like to see that guy again.’ You want to deliver the goods and be Old Reliable.”

Now 63, the veteran stand-up is one of only a handful of performers who can genuinely combine comedy and music in one act — as audiences will be able to see for themselves when he brings his current show, Rich Hall’s Hoedown, to the Concert Hall in Blagrave Street, Reading, on Friday, November 24.

Joined on stage by his Hoedown band, the show begins as a withering dissection of Trump’s America but ends up an unashamed celebration of Americana.

There’s Hall’s distinctive brand of stand-up, the improvised ballads, cracking good musicianship and ultimately a hilarious, foot-stomping good time to be had by all. Even if you don’t own a hoe.

“I will have such a great collection of musicians on stage for the Hoedown,” pledges Hall. “Having a band there makes it a much richer experience — if you’ll pardon the phrase! Music works in my show because it connects with people on a very personal level.

“A lot of comedians just come on stage and say, ‘I was on a bus and I passed so and so.’ But that’s just a reaction to something rather than a specific, custom-made song that engages people. The magic is more important than the material. People really respond to that.”

The stand-up’s other trademark is anger, and he is capable of using that to very effective comic ends.

“It’s always good to articulate anger,” he says. “If you don’t, you’re merely preaching to the converted and asking, ‘Have you ever noticed?’ Yes, we are paying you to notice things we haven’t already noticed!”

Born in Alexandria, Virginia, Hall may have lived in the UK on and off for nearly a quarter of a century but the election of Donald Trump has seen him emerge as one of the US president’s most trenchant critics.

His most recent BBC Four documentaries, Rich Hall’s Presidential Grudge Match and Rich Hall’s Countrier Than You, together with his Radio 4 series Rich Hall’s (US Election) Breakdown, have helped him build a whole new army of followers.

He is also known for his regular appearances on QI and Have I Got News For You.

There are yet other strings to Hall’s bow. He spends part of his time during the off-seasons writing plays in his native USA, where he has a small ranch outside Livingston, Montana, and is also the author of a number of books including Things Snowball.

In perhaps the ultimate comedy accolade, Hall’s deadpan style is said to have helped inspire the superbly cantankerous barman Moe Szyslak in The Simpsons.

Before heading off, Hall pauses to reflect on what he loves so much about touring. “I’m not a big showbiz hound, but for me being on stage is the most satisfying thing imaginable.”

A sentiment his legions of fans would no doubt wholeheartedly share.

Tickets for Rich Hall’s Hoedown at the Concert Hall are £19 and can be booked by calling 0118 960 6060 or visiting www.readingarts.com

The show starts at 8pm and has an advisory age rating of “PG”.

For more information, including a full list of tour dates, visit www.offthekerb.co.uk/rich-hall or www.facebook.com/TheRichHall