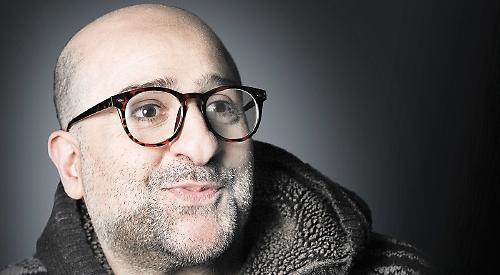 AWARD-winning comedian Omid Djalili has extended his “Schmuck for a Night” UK tour by popular demand.

Having visited the Reading Hexagon and the Wycombe Swan earlier this year, this time around he will be stopping off at Norden Farm in Maidenhead.

His shows at the Altwood Road venue on the weekend of December 16 and 17 are his last before Christmas.

But anyone unable to make those dates will have another chance to catch him when he plays six nights at London’s Leicester Square Theatre between January 7 and 14.

Having taken a break from touring over the summer to play the starring role of Tevye in Fiddler on the Roof, the comic has no shortage of things to talk about...

How’s “Schmuck for a Night” been treating you so far?

It was truly an honour to do 110 dates. The producers of the TV show The Undateables said as soon as my tour is over I can come back and do another 110 dates.

What can audiences expect from the show?

It’s a comedy rollercoaster. But you have to be a certain height to take the ride. If you’re shorter than my hips you won’t be let in.

Were you driven to take the show back on the road by the ever-changing political climate? There must be so much you want to talk about!

I had to come back. There are heckles dating back to October 2016 that I still need to respond to.

Did you find it tricky to constantly keep the show fresh when touring earlier in the year or did the news provide a constant source of ripe comedic material?

All my material is frozen immediately after it’s written so it’s always fresh.

How much had the material changed from the first to the last show?

Some of it had thawed and was starting to smell.

What was the schmuckiest thing you did on the last leg of the tour?

Well that was when I was forced to eat everything in my freezer without defrosting to make room for my jokes. It took hours and I got ill. But the jokes stayed fresh and that’s all that matters.

As part of your role as Tevye you had to sing and dance. Can audiences expect you infuse that showmanship into your current stand-up?

Absolutely. Audiences have been known to riot if I don’t sing and dance. Well, maybe just in Charlottesville.

What was it like working with director Daniel Evans on Fiddler?

My god, is that his name? The whole run I called him Derek.

What are the differences in your own creative processes of putting together a stand-up show and being involved in a musical theatre production?

The differences are huge. In musicals, you need laser-like precision to get words and songs right or the show collapses. In stand-up all I have to hope for is the audience don’t recommend me for immediate deportation.

In late 2016, you filmed a live-action Disney adaptation of The Nutcracker. Who did you work with, what was your role and when can we expect to see the film in cinemas?

Helen Mirren was with us for a day and was very nurturing and motherly. Especially towards me. When she noticed I was uncomfortable and kept tugging at the groin area of my trousers she advised me never to run out of clean underwear and avoid wearing my teenage son’s swimming trunks — a) because they are too small and b) chlorine from the swimming pool will always cause itching. I’ll never forget that. Amazing woman.