England's own Hamilton is coming to the Kenton 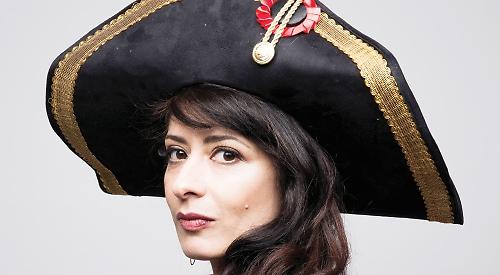 HAMILTON, the blockbuster musical about the life of American founding father Alexander Hamilton, opened in the West End just before Christmas to near-unanimous critical adulation.

Inspired by Ron Chernow’s 2004 biography of Hamilton and with music and lyrics by Lin-Manuel Miranda, the show has proved a smash hit on all fronts since debuting on Broadway a little over two years ago.

The sheer scale of its success made it inevitable that it would cross the pond, and the show is likely to be playing sold-out performances at the Victoria Palace Theatre for as long as anyone could reasonably foresee.

A daily lottery is operated via the show’s website and phone app, giving theatregoers the chance to shorten the wait for this hottest of hot tickets.

But what many people might not realise is that England has a historic Hamilton of its own — and that a show about her life and times is coming to the Kenton Theatre on Thursday (February 1) courtesy of the Iranian-born comedian Shappi Khorsandi.

Emma, Lady Hamilton, is best remembered as the mistress of Lord Nelson and the muse of the fashionable portrait artist George Romney, who used her likeness in numerous canvases.

Born in April 1765, the daughter of a blacksmith who died when she was just two months old, having received no formal education the young Emma moved mountains to haul herself from scullery maid to titled lady.

At one point, while working as a hostess at a country estate in the South Downs, she is said to have entertained the company by dancing in the nude on the dining room table.

But following Nelson’s death at the Battle of Trafalgar in 1805, she fell deeply into debt, eventually dying in poverty in Calais, where — despite the Napoleonic Wars still being ongoing — she had moved to escape her creditors.

Nelson had asked the British government to provide for Emma and their daughter Horatia in the event of his death, but his wishes were ignored, regardless of his status as a national hero.

Some 200 years on, what inspired Shappi to base her latest touring show Mistress and Misfit on the life of Lady Hamilton?

“Well, Emma Hamilton was a fascinating character but like all women, honestly, you do a short stint as a prostitute and then you’re tarred with that brush for the rest of your life...”

In the publicity material for the show, Shappi acknowledges Emma’s reputation as “a bit of a harlot”, adding: “You get one job in a brothel and bang goes your reputation. Yes, she occasionally danced naked on tables to get ahead in life, but who hasn’t?”

As a fellow naked dancer on tables, Shappi’s show raises a glass to the woman England betrayed.

“She was somebody I knew about because we did Horatio Nelson at primary school and I was fascinated by the fact that he had this beautiful mistress called Emma Hamilton. I enjoyed reading about naval history, particularly around that time, because it paved the way for the empire — without Nelson we wouldn’t have ruled the waves, and all that malarkey.

“So as I read about Emma Hamilton I thought, well, she wasn’t just some courtesan. She was incredibly bright. She lived at a time when women had no agency — she had to basically be passed from man to man.

“But what really made me want to do the show about her was finding out that as Nelson sat on HMS Victory and he could see the Spanish fleet on the horizon as he went into the Battle of Trafalgar he changed his will.

“He wrote an add-on to his will and he asked that in the event of his death Emma Hamilton and his daughter Horatia be looked after.

“He wrote ‘This is all I ask of my King and country as I go to fight her battle’ — and they didn’t keep their promises!

“They ignored this part of Nelson’s wishes. They made him into a naval hero — he was a huge celebrity in his lifetime — but they allowed the love of his life to die a derelict alcoholic refugee in Calais because she left to escape prison. Ironic, hey?”

The stuff about Emma’s membership of the oldest profession isn’t a joke, by the way.

“She lived at a time when I think one in six women in London worked as prostitutes in Covent Garden and there was something called the Harris List which reviewed every single prostitute in London — it was like a TripAdvisor for prostitutes! And Amy Lyon — Emma’s birth name — was there.

“So she came from that to then becoming somebody who was a massive celebrity — the Kim Kardashian of her day, if you like. She did public performances and she was best friends with Queen Carolina of Naples. You know, all of this!

“So I felt that the Victorians came along, they wrote Nelson’s history, they wrote Emma off as some tart — and I want to come along and go ‘No, actually, this is a phenomenal woman who we’ve done a massive disservice.’ There isn’t even a monument to her in London. There’s a small statue of her in France, but not here.”

Speaking of celebrities, it’s only a short while ago that Shappi was lighting up our TV screens as one of the contestants in the 2017 edition of I’m a Celebrity... Get Me Out of Here! — or as Shappi calls it “I Wanna Be a Celebrity... Get Me in Here!” Given that she was one of the first to be voted out, presumably she wasn’t too bothered by the “popularity contest” side of things?

“No, no,” she laughs. “Being voted out is not a measure of popularity at all, by any means. In fact, I saw it as an act of compassion!

“I mean, it was a massive shock to my system — it was the most artificial environment I’ve ever been in in my entire life. And I’m glad I did it — I got to jump out of an aeroplane!

“And, crucially, I got to just slow down — because you’re so hungry you just go slooow... you slow down, your brain slows down.

“It was like being taken outside of your own body and you’re forced to look at your life and really properly assess what’s important to you and what isn’t — and in that way it was quite life-changing.”

“Being away from my nearest and dearest for three weeks, not even being able to call them, and being with a lot of strangers in an environment where you couldn’t make genuine connections — honestly, that made me really re-evaluate my life and realise just how much we put on our plates unnecessarily. We tell ourselves we’re busy, busy, busy — but what are you busy doing?”

Shappi, who has a son and a daughter, both of primary school age, continues: “It made me realise that with regards to my children — well, I have just made my life so that I’m home much, much more. Because you tell yourself ‘but I’ve got to provide, provide, provide’ — even though half the time you’re just chasing your tail. It’s made me a lot calmer and more inclined to work smarter rather than work harder — and that’s what I learned on I’m a Celebrity!” she laughs.

• Tickets for Mistress and Misfit are £16 for adults with concessions £14. Stage time is 8pm and the show is recommended for ages 14 plus. To book, call (01491) 575698 or visit www.kentontheatre.co.uk. For all tour dates, visit www.shappi.co.uk