Talkative comedian has taken his cue from TED 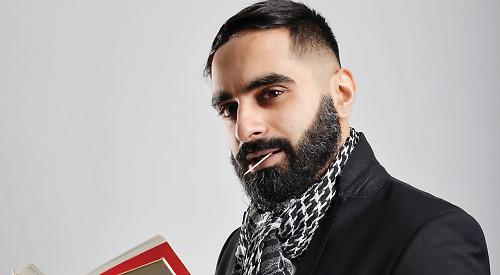 HE’S a Muslim, a working class man of faith, and a northerner with a capital N. Probably in that order — but there’s no need to take our word for it.

Following a stellar run at last year’s Edinburgh Festival Fringe, stand-up comedian Tez Ilyas is hitting the road with Teztify — his third touring show in as many years.

His previous two, TEZ Talks and Made in Britain, both garnered mass critical acclaim and sold out across the board.

Teztify is no different. It’s a spectacularly powerful, provocative and brilliantly funny hour of topical stand-up from a comic whose name is hot on everyone’s lips.

Having spent a lot of the past year dealing with the ignorance of the aftermath of a series of major terrorist attacks and the resurgence of the British far right, Ilyas is planning on “teztifying” live on stage against all the assumptions the world has of him.

His 2018 national tour, which opened at London’s Soho Theatre last week, will take him to Reading’s South Street Arts Centre next Thursday (April 12).

So what’s Ilyas got to say for himself? TEZ Talks, a pun on the popular conference lecture series that started life as a stand-up show in 2015, has since made the transition to the airwaves, with a second series recently airing on BBC Radio 4.

Inspired by his life as a British Muslim, Ilyas set out to defuse what he considers the numerous misconceptions that people have about Islam.

The live show was staged as an introductory seminar in becoming a convert to Islam, with the audience playing the part of potential new recruits. This format enabled Ilyas to explain the intricacies of his belief system while putting bigoted misconceptions to bed. A series of mock-inspirational speeches on integrating into British society explored “British values” while concepts such as Ramadan were explained with unpatronising good humour — as you would hope.

“I’ve always had a knack for making people laugh,” says Ilyas, whose recent TV appearances have included Mock the Week, Live at the BBC and Channel 4’s The Last Leg.

“People usually find my running commentary to things pretty fun and I was always very disruptive in school. I didn’t have any dreams for doing stand-up, though — that came kind of accidentally in my mid-twenties.”

That being so, was there ever a Plan B? “Funnily enough, this is the Plan B! I was a civil servant for 10 years. Stand-up started as a fun hobby and it’s now grown into my passion, dream and career. If this fails now, I’ll probably drive a cab or stack shelves.”

Come now, surely there’s always I’m a Celebrity? Ilyas has previously appeared on companion show Extra Camp, so presenters Ant and Dec — well, Dec for the moment — would be bound to welcome him with open arms. Wouldn’t they?

“You know what? Yes. Not any old rubbish, though — I wouldn’t do Big Brother. But I’d love to do Strictly — I’m actually a pretty good dancer — and the Jungle would just be a great once-in-a-lifetime experience. So, depending on who’s asking, sure.”

The comic, who turns 35 on Sunday, has been a full-time entertainer since 2015, but has been on the stand-up circuit for longer. Has he played South Street before?

“I’ve gigged in Reading a few times and have always had fun. The audience is really receptive and smart and I liked it a lot. Also, I did a show in Maidenhead last year and had the most ridiculous experience of my life — but you’ll have to come to the show to hear all about it!”

On Thursday, April 26, Ilyas plays the Old Fire Station in George Street, Oxford, where tickets for the 8pm show are £12. Call 01865 263990 or visit www.oldfirestation.org.uk