Newsreading comic has a straight face for radio 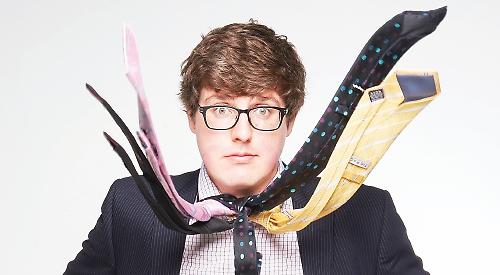 TEN gigs into his stand-up career, Glenn Moore had reached the final of So You Think You’re Funny and was runner-up in the Chortle Student Comedy Awards.

At the time he was studying English literature at the University of Sheffield — where he also created the successful sketch comedy duo Thünderbards with fellow aspring comic Matt Stevens.

Now he tours the country both solo and as part of the double act, while holding down a day job as a newsreader and “sidekick” to Christian O’Connell on the presenter’s Absolute Radio breakfast show.

Tonight (Friday) Moore is headlining the latest “Comedy at the Kenton” night at the New Street theatre, where he is sharing the bill with Julian Deane and Lou Sanders.

Last September saw him make his Mock the Week debut, having previously contributed material to the BBC Two show.

Moore’s has been a meteoric rise by any standards, with GQ magazine saying he is “tipped for great things” and comedy website Chortle hailing him as “an inventive thinker who stands apart for the quantity and quality of his gags” and praising his “great one-liners, with silly turns of phrase that really shine”.

High praise, by any standards. But when did Moore first realise he was funny?

“Well, if you saw my set in Milton Keynes last Friday, it would be apparent that it’s a skill I am very much yet to master.

“I liked trying to make people laugh at school from maybe the age of nine, but for every person I made laugh there was someone who found my jokes agonisingly unfunny, so it took a while to figure out.

“I guess if it doesn’t work out there’s always the radio career to fall back on. My back-up for comedy was newsreading, and my backup for newsreading was comedy, so here’s hoping they go well!”

With early starts for the breakfast show and stand-up gigs in the evenings, how does Moore find the time and energy to come up with fresh material?

“I do the radio show every morning from 6am to 10am then usually leave the house for a gig at 6pm, so I have an eight-hour window to write and wish I was getting more sleep.”

There have been occasions, he admits, when comedic inspiration has struck just when he doesn’t want it to — bang in the middle of a serious news bulletin.

“I’ve managed to keep both sides of my life quite separate, but there have been times where I’ve had a laughing fit while reading the news. So if you ever hear me having a bout of ‘coughing’ whilst newsreading, that’s what’s happened there.”

Tonight’s show, which starts at 8pm, will not be the first time Moore has performed in Henley — last year saw him help launch the current series of Comedy at the Kenton nights before playing the Salon Comedy Club at the Henley Festival.

“It was great fun,” he says of the latter, “although my set clashed with the Pet Shop Boys, so boy was that some tough competition! You could hear their set very clearly during mine, so it was actually nice to do material with a backing track of West End Girls.”

Many stand-up comedians when they are first starting out often tour as a warm-up act. Did Moore find this beneficial?

“Yes! It trains you well to perform to an audience who are specifically there to see someone who isn’t you. It’s much harder to get them to like you, because you are the only thing standing between them and the person they want to see, so you improve a lot quicker as a comedian.”

Does Moore remember the first comic he saw live? “Lee Evans, when I was about 12. It genuinely hurt, laughing that much. I couldn’t breathe.”

Having forged a career in both sketch comedy and stand-up — both live and on the radio and now television — is there any one style of humour he most enjoys?

“They’re all good fun! I like to dedicate equal time to all of them but they’re all equally time-consuming, so in many ways they’re collectively ruining my social life.”

That being so, if he were stranded on a desert island and could have anyone for company, who would he pick?

• Tickets for Comedy at the Kenton are £11 including £1 theatre restoration levy. The show runs for two hours including an interval and is recommended for ages 14 and up. For more information and to book, call (01491) 575698 or visit www.kentontheatre.co.uk