Lost ‘Hancock’ is at heart of stage show 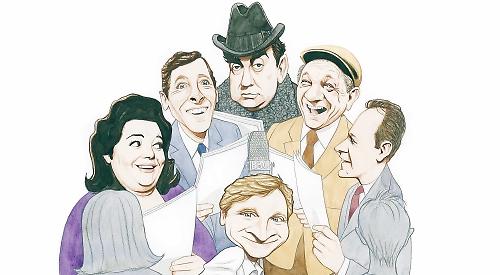 IT was one of the biggest shows on radio and TV and played a key role in the evolution of what we now call sitcoms.

Written by Ray Galton and Alan Simpson, Hancock’s Half Hour won a devoted army of fans and has continued to make the news when lost scripts or episodes wiped by the BBC resurface.

One such lost episode, titled Sid James’s Dad, forms the centrepiece of “Hancock and Co” — a new show coming to Norden Farm Centre for the Arts in Maidenhead on Saturday, May 26, at 8pm.

Berkshire-based actor and impressionist James Hurn will be giving the material the “one man, many voices” treatment he specialises in.

A spokesman for Norden Farm said: “James voices the entire cast. He is a master at recreating the accents and personas of such iconic 20th century British favourites as Tony Hancock, Sid James, Hattie Jacques, Bill Kerr and Kenneth Williams.”

The show will also feature two Hancock episodes written by James in the style of Galton and Simpson — The Inheritance and The Keep Fit Regime.

Last year saw James take “Hancock and Co” on a
sell-out UK tour. However, he remains best known for his television work, which includes parts in Scoop, Dead Ringers, The Slammer, Spoof, The Mrs Bradley Mysteries and Band of Brothers. He has provided the voices for many British politicians and George W Bush in various productions and starred as the voices of David Beckham and Prince William in the BBC Radio 4 drama The Bid.

The Norden Farm show will be performed in the style of a radio performance in front of a live audience, bringing to life the classic days of BBC radio comedy.

As reported last week, James will also be appearing at Hancock’s old school, Bradfield College near Reading, on Monday, June 25, as part of a
one-day event marking the 50th anniversary of the comedian’s death.

Tickets for “Tony Hancock — a Celebration” are £55. For more information and to book, visit www.ticketsource.co.uk/
bradfieldevents