Fighting and shouting in the town hall (just for fun) 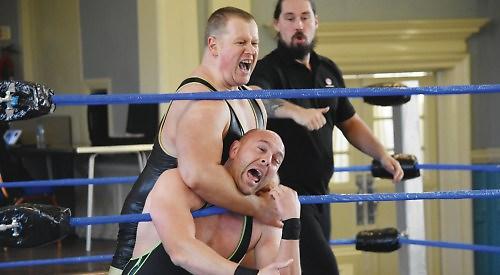 The thrills and spills of professional wrestling came to the historic building when the Superstars of Wrestling took part in four bouts in a specially erected ring. The 70-plus spectators witnessed body slams and other moves executed by wrestlers including “Big Money” Bobby Vegas, The Mystery Man Tagori and 28-stone Big Dogg.

Kian “The Fox” Kelly, a villain, played up to the crowd, telling them to “shut your mouths”.

He shouted at one man: “Get yourself down the gym — you look a mess” and told a woman who barracked him: “Shouldn’t you be at home washing dishes?”

He was then disqualified from his bout against Oliver Grey for using a belt to strike his opponent.

The final fight was a “royal rumble” involving eight wrestlers in the ring at once. James Atkins, of Superstars of Wrestling, said that although the crowd was smaller than he had hoped, he had received some positive feedback.

“It’s nice to bring a show like this to a town that wouldn’t normally have it,” he said.