‘Heseltine’s Newsnight passion had me in tears’ 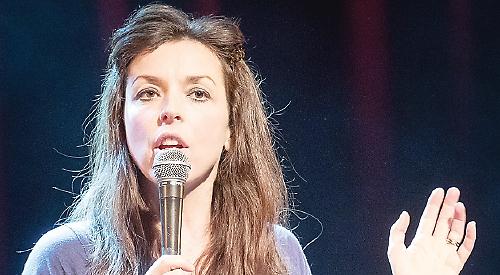 BRIDGET Christie is, by her own admission, a worrier. Climate change, cyber espionage, Brexit, Trump, plastic/air pollution, nuclear threat, inequality, the world we’re leaving for our children, Doritos for women — they all cause her anxiety.

The good news for comedy fans, however, is that those concerns are translated into laugh-a-minute shows that have been garlanded with awards and sold out wherever she has performed.

And when we meet to discuss her latest show, the Gloucester-born comic certainly isn’t doom and gloom — she’s a cheery presence who laughs easily.

What Now? is a follow-up to 2016’s Because You Demanded It — the left-leaning, pro-EU comic’s heartfelt response to the referendum vote.

The hiatus, she says, was deliberate. “I wanted to leave a bit of space between Trump being elected, the Brexit vote and 2017’s general election. Everything was moving too fast — things I’d write in the day already sounded out of date by the time I did them at gigs in the evening.”

Christie knows that’s a slightly startling admission, but one that very much reflects the uneasiness of the times.

“I have found the news cycle exhausting. Although I do mention them in parts, the new show isn’t all about Trump or Brexit because I think people have Brexit/Trump fatigue now.

“Because You Demanded It was a very emotional response to what had happened, whereas What Now? is a bit more reflective. Okay, so that’s happened, this is where we are now, what shall we do? It’s a much more light-hearted and personal show than previous ones, I think, and that is very much deliberate.”

So what is Bridget’s broad take on where we are? “I don’t think anyone — however they voted in the referendum or the general election — got what they wanted, and now it’s chaos,” she says.

“But for me there is a funny side to it all on a purely personal level — people I’ve always disagreed with, I now find myself empathising with, thinking what a reasonable person they are.

“Michael Heseltine, a dyed in the wool Tory who shoots squirrels and strangled his mother’s dog when it bit him, was on Newsnight talking about the long term economic and social implications of Brexit and he was so impassioned and eloquent about the whole thing I started crying. I thought to myself, what the hell is happening?

“As a pro-EU feminist, it’s very discombobulating. I’m even on the same side as [lap-dancing club owner] Peter Stringfellow now, who’s leaving the Tories because of their hard Brexit stance. He says he wants to be remembered for being on the right side of history — although I think most people will remember him for the pornification of British culture.”

Fair comment. But how does Christie go about making such heart-rending subjects as female genital mutilation — which she talked about in 2014’s An Ungrateful Woman — funny?

“For something that serious it’s important to know the subject well, to do your research, and, what was most important to me, talk to survivors. I wanted to find the absurdities in it and the flawed logic. Sometimes, though, I will want to talk about a subject but just can’t find the way in, and I have to leave it aside until I do. Or just not do it.

“Writing comedy about serious subjects is like solving a puzzle. But it’s a privilege, too, to be able to talk about these things, to have a platform — you just have to remember that you don’t have to be right, or to solve anything, you just need to make it funny, and knowing that frees you up.

“With What Now? I wanted to write something fairly mainstream — light and fun that lots of different types of people might enjoy. I’m calling it my Chris de Burgh show — I’m going to dress up as him as well!

“But seriously, I am worried about how politicians’ lies are now just something we accept, and if this continues I don’t know where we go from there. I think journalists have a real responsibility now to call them out on them and not just move on to the next question. It’s toxic and dangerous and we can’t allow it to become normalised.”

Despite everything, Christie says there is cause to be optimistic.

“When I was touring Because You Demanded It, a lot of people came up to me afterwards and said they had voted leave but enjoyed the show, because I was articulating some things that they feel the same way about.

“At the end of the day, lots of us are worried about the same things — the NHS, education, social care, housing, climate change — and sometimes it’s better to focus on the things we have in common rather than the things we don’t.”

• Bridget Christie’s What Now? tour concludes at the Oxford Playhouse on Friday, June 29. Tickets are £20. To book, call the box office on 01865 305305 or visit www.oxfordplayhouse.com