Comedian minds his Ps and 45s 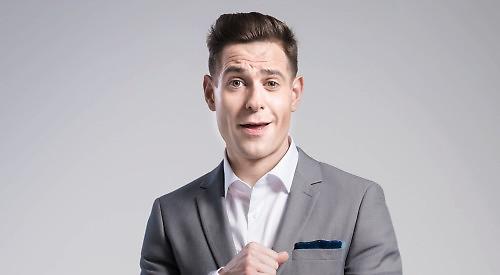 LESS than a year after he handed Theresa May a fake P45 signed “from Boris” at October’s Conservative Party conference in Manchester, Lee Nelson has this week found himself the most topical comedian in the land.

Monday afternoon saw the former Henley MP resign from his cabinet role of foreign secretary in protest at the government’s Brexit policy.

With a week being a long time in politics, what will happen next is unclear, but the timing could surely not be better from the point of view of the Henley Festival — with Nelson, real name Simon Brodkin, due to take to the Salon Comedy Club’s stage at 9.15pm tomorrow night (Saturday).

Prior to October’s stunt, which saw him frogmarched from the conference hall and swiftly arrested, Brodkin had written his name into legend with a number of topical pranks.

These included receiving “four yeses” from Simon Cowell after appearing incognito as a rapping rabbi on Britain’s Got Talent, surrounding the soon to be President Trump with swastika-emblazoned Nazi golf balls at the reopening of his Turnberry golf resort and, perhaps most memorably, showering disgraced FIFA president Sepp Blatter in dollar bills at a press conference.

Blatter’s response was to tell Brodkin, who was present in the guise of fictional Premier League footballer Jason Bent, that “You should be ashamed of yourself.” Trump’s yell of “Get him out!” was even more succinct, while Cowell immediately disqualified him from Britain’s Got Talent on learning the truth.

Ahead of his Henley Festival appearance in Remenham, which takes place in Theresa May’s Maidenhead constituency, the comic agreed to be interviewed — in character.

A. Naughty. I hated school. They were the worst three weeks of my life.

Q. How many times did you get expelled and why?

A. Just the once, obviously, you ain’t allowed back! I was kicked out for slashing the headmaster’s tyres. It was well funny, he was stuck in his wheelchair for 20 minutes!

A. Yeah, it’s brilliant. The only downside is being photographed all the time. Like last week, when I was minding my own business doing 60 in a 30.

Q. What was your best ever date?

A. I cooked her an amazing meal a few weeks ago, she loved it. The truth is, I actually didn’t cook it, I bought it. Luckily she never realised and just sat in the back of the car eating her nuggets.

A. We done a Posh and Becks and named him after where we done it!

Q. How has fatherhood changed your life?

A. Well, I got to be more responsible now. I can’t just leave my little boy at home, go clubbing, get well drunk, go back to a bird’s house and come back to my flat two days later. These days I’m a dad. I got to take him with.

A. Me and Amber are arguing about this at the moment. She wants to have four more whereas I’d quite like to split up.

Q. You’ve got a 13-year-old sister. Are you protective of her?

Yeah but I wish she’d be more protective of herself. She’s four months pregnant.

Q. Can you tell me about the time you stole your own DVD and what happened when you tried to get a waxwork of yourself into Madame Tussauds?

A. I have the right to remain silent.