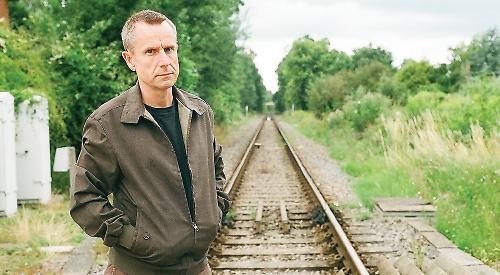 HE may describe himself as a “pessimistic soul”, but the popular broadcaster, writer and comedian Jeremy Hardy is feeling upbeat and positive about the future. And it’s largely down to the way that British people voted in last summer’s general election.

“There’s been a different mood since then as my side seems to be doing a bit better than we thought and everything is up in the air now,” he says. “There’s a sense that anything can happen.”

In case you’re not aware of Jeremy’s “side”, he’s very much in line with the direction of the current Labour Party as headed up by another Jeremy — Hardy’s friend Corbyn.

“The Conservatives seem to be more and more on the back foot and completely unravelling and Labour have been talking about things they hadn’t dared to mention for a long time, such as nationalisation — though we’re only talking about a level of state control that would be normal in Germany, France or Holland.

“Things seem to be moving along quicker and happier than I thought they would and it’s actually hard to see how the Tories could win the next election. Theresa May is not only a scheming plotter but she’s really bad at it — she’s like a homeopathic poisoner.”

Now in his fourth decade of a successful stand-up career, the hilarious Hardy is one of Britain’s most critically lauded comics and a firm favourite with BBC Radio 4 listeners, where he is best known for his appearances on the evergreen panel shows The News Quiz and I’m Sorry I Haven’t a Clue.

While Radio 4 isn’t renowned for the youthfulness of its audience, Hardy says he’s been delighted to note a lot of younger faces cropping up at his live shows.

“It depends on where you go as some towns have an older demographic,” he admits. “But in the same way that they’re engaging more with politics, young people are seeking more things out. So they’re finding that this weird old guy Jeremy Hardy has been banging on about this stuff for 30-odd years and they think ‘Let’s give him a try.’”

Some crowds might go to a stand-up show to have the world put to rights and to leave the venue armed with answers on how to navigate a crazy and confusing outside world. A Jeremy Hardy show might have looked and felt like that once upon a time, but he’s now a more reflective and realistic soul.

“The show is about life in general and I’m doing personal stuff because when you see a comedian you want to know a bit about them as a person. Certainly, when I watch a comic I want to know what really makes them tick. I know what they think about smartphones and aeroplanes and the EU, but what do they think about when they wake up in the middle of the night?

“It’s about making things a bit more human and I think people like to feel that you’re not so different from them. People like you to be a bit less bulletproof and that you’re not just coming on to show off to them, you’re there to make a connection and say something they can relate to.”

Recently, Hardy was back on Radio 4 with a new show, Jeremy Hardy Feels It, which tackled subjects people can relate to.

After doing 10 series of Jeremy Hardy Speaks to the Nation, he wanted the new show to be a “much more straightforward show with less other business going on in it”. As such, the four broadcast episodes were entitled “Happiness”, “Sadness”, “Fear”, and “Hope” — without the usual focus on politics.

Hardy’s thoughts on those topics will inevitably bleed into the live dates, and given his newfound optimism with the political landscape, what else makes him happy these days? “Spending time with people I love, looking out at a beautiful bit of countryside when I’m on a train, listening to music I love. I’m quite easy to please in that regard. Everyone has the capacity to be happy but it just gets worn out of you. Babies are usually happy.

“You can be happy about things without having to go hang-gliding or doing drugs or something extreme to try and get you to that point. Just waking up feeling all right within yourself is quite important. I can be made to feel happy quite simply. I’m a simple soul really.”

But luckily for us, still a very funny one, too.

Tickets for the Goring show, which starts at 7.15pm, are £14 and can be booked online via www.tickettailor.com/events/
gapcomedy/174726

A spokesman for organisers the Gap Comedy Club said: “We’re delighted that Jeremy will be performing in Goring and we look forwad to seeing you all there!”