L-plates comic has the drive to go all the way 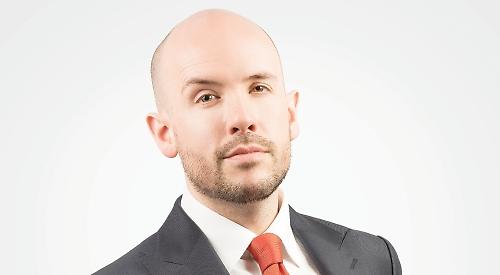 A MAN who has supported Sarah Millican around the world (comedically speaking), won the prestigious So You Think You’re Funny award, and has been favourably compared to Eddie Izzard, Victoria Wood and Oscar Wilde, Tom Allen is quite simply one of the most erudite acts in British comedy.

Never happier than when he’s tossing out quotes from the poet William Henry Davies or lyrics from the movie Grease, Allen is positively purring when he considers the success of his debut touring show, Absolutely.

This saw him sell out both the Kenton Theatre and Reading’s South Street Arts Centre back in May. But now there is one more chance to catch him on this tour when he appears at the Oxford Playhouse on Sunday, September 30 — though be advised that tickets are “selling fast” according to the Beaumont Street venue.

Recalling his early preparations for the tour, Allen says: “I like to do a preview around the house, maybe for some teddy bears — they’re a gay social grouping that I know. You want it to feel fresh and invent around it and add things and you want to be relaxed about it. Last year I talked a lot about things in my past and this time I wanted to do something about my present which admittedly remains dogged by my past because I’m still living with my parents.”

Of course, Allen is not alone in this situation, with many people unable to afford their own home. He aims to capture this feeling of frustration in his new show.

“As we saw in the general election, my generation and those younger than me are feeling, ‘Well, you’ve got to do something for us — give us one thing to look forward to.’ I certainly wouldn’t consider myself a political comedian but it’s an interesting time, though for me it’s still combined with a heightened sense of snobbery — I still have an air about me that’s, ‘Well, of course I still want avocado on sourdough bread’ and ‘No, we’re not going to a Toby Carvery for dinner, absolutely not.’”

Living at home with his parents will inevitably lead to some friction, admits Allen, no matter how much the family members love each other.

“At one point, I started giving my dad some interior design advice about having the desk at a particular angle by the window and he said ‘Why don’t you get your own house?’ There’s a little bit of tension around.

“We decorated my room in a bid to create the illusion of me having control over my life — I took time choosing what colours to have and what lamps to go with and then Mum and Aunt Christine went to Dunelm Mill and bought me a lamp that they liked.

“It was very nice but not what I wanted, and you can’t just hide that away in the cupboard. Socially it’s very complicated, and results in lots of lying and eventually an explosive argument — it’s great value.”

Still, there are some changes afoot in Tom’s life and the good news is that he’s passed his driving test at the third attempt.

“I had a lovely two to three years of learning — it was like another degree and I feel very happy that I can drive. What I want to talk about in the show is that sense of moving forward. I think a lot of people experience those around them running ahead and sometimes if you’re not in the same boat as them — if you’re not getting married or not owning your own home — you can feel a bit left out.

“For me, I wonder, well, is what they’re doing necessarily better? So, I’ll talk about weddings and some hen parties that I’ve been invited to. I don’t quite know when that started, when gay men began to be invited to hen dos. I don’t think lesbian hen dos invite a straight bloke along so they can sit in front of Sky Sports.”

You’d have assumed that, having passed his driving test, a sense of liberation, freedom and exhilaration would have washed over Allen as he took to the open roads of the United Kingdom. Not a bit of it.

“Because I couldn’t afford my own insurance on a car, I got insured on Mum and Dad’s Ford Fiesta Zetek, 1.5 litre engine, five doors. The boot doesn’t open, which is not a euphemism. The car is maroon which is great because it goes with nothing and so clashes no matter what I wear. There’s moss on the back windows and the wing mirrors are being held on by gaffer tape. To quote from the song Greased Lightnin’, it’s a real pussy wagon.”

As someone who is on the road a lot, heading to various theatres, comedy clubs and arts venues to perform his own learned brand of stand-up, Allen is now able to get himself around rather than rely on lifts or use public transport.

“One of the things I get anxious about it is getting petrol on my hands — what if it burns? So, I put the gloves on when I’m at the petrol station, and there are those tissues you can use. I like to avail myself of all the accessories. But when I did so, my friend openly mocked me.”

Rather than taking endless taxis or getting lifts from his parents, the 35-year-old Allen is now in a position to drive his parents on occasion. Something of a rite of passage, so how is he finding it?

“Slightly easier than when I was learning to drive. My father took me out sometimes when I was learning and had one of those voices that said, ‘Now, just relax when you’re driving’ — and in me it brought forward the opposite reaction! But my parents often despaired of me — my mother would try and hurry me off to school and I was wandering around in a silk dressing gown pretending to be Noël Coward.”

Motoring issues aside, as someone who clearly has a deep love of language, you can imagine Tom joyfully revelling in the discovery of new words.

“I do like words. I learned the word ‘esoteric’ just the other day — ‘that which is created or delivered for a specific audience or an audience with a specific reference point’. I don’t know if I’m esoteric — I think I’d like to think I was, but in reality I’m actually very ordinary. But isn’t that the thing — it’s the game we all play, the secret we all hide — is that we’re actually the same as everybody else. I do say the word ‘absolutely’ quite a lot and last year I called my show Indeed. They’re just words for saying yes, and it is important to say yes to things and to live life to the full as much as one can.”

On which note, now that he has passed his driving test and is selling out theatres around the country, what would his dream car be?

“I would love something sporty but it depends how much money I have after I have sorted a house out. But then I have hired some very nice GTis recently and with touring how am I going to have the time to look after a house?”

Good point. Before we go, how did he get into stand-up?

“I wanted to be an actor and was working in the office at the National Youth Theatre. There was always banter in the office and I think it was Charlie Baker the comedian who overheard me and suggested I try it. Thirteen years later I am on my first solo tour.”