Comic has doctor’s orders for the NHS 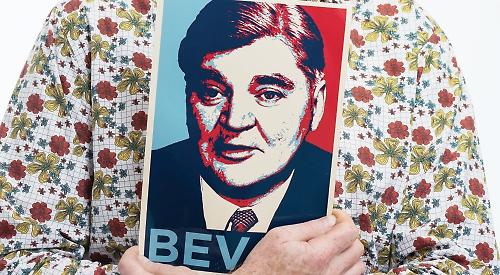 Admittedly, it would have been a slightly bigger story if the Philip Hammond in question had been the current chancellor of the exchequer rather than the popular TV doctor of the same name.

Namesakes aside, the story gained further legs when the BBC sacked Hammond from his Bristol radio show for declaring his candidacy under the banner of the National Health Action Party.

Hammond says: “It was either drop me or give Jacob a show, so they dropped me!”

A writer, broadcaster and investigative journalist who writes the Medicine Balls column in Private Eye, Hammond has a bit of a political track record.

As a junior doctor he contested the 1992 general election under the banner of the Struck Off and Die Doctor’s Alliance.

Running against William Waldegrave, the then secretary of state for health, in the Bristol West seat, he captured a mighty 87 votes.

More significantly, that same year he was one of the doctors who broke the Bristol heart scandal, later giving evidence at the public inquiry.

More than a quarter of a century on, Hammond is still a practising doctor and continues to tour the country with occasional comedy shows.

His latest — Happy Birthday NHS? — takes him to Norden Farm Centre for the Arts in Maidenhead on Thursday (October 4).

The show invites people to celebrate the history of the NHS while rebuilding it to their liking.

Hammond said: “Nye Bevan’s baby turned 70 this year, but will she make 100? A decade of austerity with a Brexit cherry on top has brought her to her knees.”

While not everyone will share the good doctor’s prescriptions for the health service, the show invites you to join him as he explains the history of the NHS and invites audience members to come up with suggestions for how to improve it.

Hammond will debate these, add his own ideas, and cast votes.

By the end of the show, the audience will have The People’s Plan — which Hammond guarantees will make more sense than anything that comes out of the government. It’s your NHS, apparently, so it’s time you sorted it out.

A GP for 20 years, Hammond later specialised in sexual health and now works with young people with severe fatigue.

As a comedian he first appeared on the Edinburgh Fringe in 1990 with fellow junior doctor Tony Gardner as the subversively titled double act “Struck Off and Die” (see above).

He says: “In the early days our humour was exceptionally dark — I think it was somewhat cathartic to what we were going through in training.

“Now my humour is a lot gentler as I have worked my way through the profession. Tony, on the other hand, has gone down the acting route and recently appeared in Last Tango in Halifax.”

Tickets for Happy Birthday NHS? are £16. The show starts at 8pm in the Courtyard Theatre of the Altwood Road venue. To book, call 01628 788997 or visit www.nordenfarm.org