Smutty talk gives festival comic a spring in his step 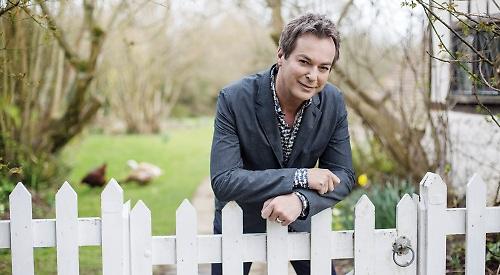 TICKETS for this year’s Henley Festival go on public sale today (Friday) — and sitting at the top of the comedy tree is Friday night headliner Julian Clary.

The veteran stand-up and TV presenter’s long and varied career has seen him grace stage and screen as an actor, while more recently he has found success as a children’s author.

The Bolds Go Wild, the fifth book in his series about a family of hyenas living in suburbia, was published in hardback last week.

The popularity of The Bolds has previously seen Clary appear at the Henley Literary Festival, but this year he will be taking to the stage of the Henley Festival’s Salon Comedy Club at 7.30pm on Friday, July 12 — followed by Geoff Norcott at 9.15pm and Vikki Stone at 10.45pm.

But first he is taking his new show “Born to Mince” around the UK. The tour, which started earlier this week, takes him to the Hexagon in Reading on Wednesday (March 20), followed by the Wycombe Swan on Sunday, May 26, and the Oxford Playhouse on Sunday, June 2.

Looking back, it’s only three years since his last national tour — 2016’s not dissimilarly titled “The Joy of Mincing”. Why did he want to do another so soon?

“Because I miss it — and what I have to do with my life is rotate various activities,” he says. “So children’s books are lovely, and I really enjoy making children laugh, but a part of me wants to talk filth and I’m not one for depriving myself of that pleasure.”

Fair enough. Does he enjoy writing his stage shows?

“I like the process. It gathers pace. The quality of the writing gets better as I get closer to it — through fear, probably. The best stuff will probably rise to the surface when I’m in the car on my way to the first gig.

“I wake up in the night. The brain is a funny thing, you know? A random, completely formed
20-minute section just comes to me just before dawn. Why is that?

“For example, I’ve been reading a lot about gay aversion therapy recently, so I had this idea that we could try heterosexual aversion therapy and get some men out in the audience, wire up their genitals, and show them pictures of Coleen Nolan. If there’s any twinge of arousal they’ll get 40 volts through the testicles.”

That would be a funny twinge indeed, if possibly not entirely legal. Does he find himself having to scribble this stuff down in the middle of the night?

“I do, much to my husband’s annoyance. In fact, he doubles as my secretary, so I dictate and he has to wake up and write it all down. He’s also my gardener, housekeeper and nurse. I enjoy an enema before breakfast most days.”

Does he enjoy seeing his hardcore fans in the front row. Is that part of the pleasure of performing live?

“It rather depends what they’re wearing. It’s a spring tour so I’m hoping for some cheerful floral print dresses with maybe a light pashmina. That’s just the men. And did you know one in five of the general public are mad? I have to be careful who I hold eye contact with. Among celebrities the percentage is higher, of course — more like one in three.”

Clary’s fans clearly enjoy the outrage factor. Does he get a kick out of getting people to gasp in shock and amazement?

“It’s one of life’s pleasures, in my opinion. It’s one of the reasons people come to see me — they desperately want to hear graphic descriptions of homosexual sex acts. They want to see if I’ll go too far. It livens up their otherwise dreary lives, I expect. It gets the heart rate going, much like fairground rides or watching a horror movie.”

Today’s comedy audiences may be less easily shocked than when Clary started out in the early Eighties — when he performed under the aliases Gillian Pieface and later The Joan Collins Fan Club — but they are also more easily offended. “I know! It’s funny — last night I wanted to put something on Twitter. It was about the Duchess of Sussex being pregnant. My husband said, ‘Yes, but who is the father?’ And I thought, probably years ago I could’ve put that on Twitter and we’d have all chortled. Now, I thought, ‘Well, I just can’t because it’s going to cause outrage.’ There’s this new word, ‘snowflake’, isn’t there? I would blame social media, I think, where there’s people who spend all day arguing. Be very careful what you say.”

Although Clary’s humour does sometimes make people gasp, it is ultimately harmless, even warm. Would he say that’s fair? “I think so. I’ve been around the block a few times and if people buy a ticket to see me, chances are they quite like me or they’ve been before. So there is a warmth and affection, but there is a sort of expectation of the boundaries being pushed a bit. So I’m happy to oblige!”

How much audience participation can first-timers expect? Should they avoid sitting in the first five rows?

“No, because I wander around now, so you’re not safe anywhere. I’ve always found people’s lives are more interesting than mine, and so I’m interested in talking to people and improvising, really. I did a straight play last year, Le Grand Mort, and it was really enjoyable, but I really had to stop myself from talking to the audience. It was in a very small theatre at Trafalgar Studios. I wanted to talk about someone’s hair and their handbag and the shoes they were wearing, and you just can’t apparently. I’m told that when acting in play you are expected to say the same words in the same order every night. Who knew?

“I had to stop myself from seeing the audience, whereas I’m very alert to them when I’m doing my own show. It’s such freedom to be able to say what you want, and maybe go down a blind alley, or create a bit of comedy magic, perhaps, if you’re lucky, if the wind’s in the right direction. I do like it more than anything.”

Given his admitted fondness for interrogating members of the audience, how does Clary feel about heckling? “I think if you’ve paid for your ticket, you can do whatever you want. I often have a set-to with the theatre staff because people take photos and you see the ushers creeping down the aisles and shh-ing and wagging their fingers and telling people they can’t, so then I go down and say ‘Yes you can’ and pose for photos with them.

“Of course you can take a photo — you paid £25. I mean, why not? It’s not a Chekhov play — you can eat, drink, take photos, you can shout out. You can urinate in an empty cider can if you must, I don’t care.”

While not wishing to distress Clary’s more ardent fans, there are rumours that he might be thinking of retiring. A line in the publicity material for his current tour warns: “This might well be the final mince.” Surely not?

“Yes, it was rather lame of me to say that, but I suppose it’s because I am 60 during this tour. I’ll be in Bury St Edmunds [on May 25] and I can’t think of anywhere I’d rather be for my birthday than on stage in Bury St Edmunds. And I do think it might be the last one. Because at what age does it become inappropriate to talk about things that I talk about?

“I also wonder, would people want to see much more of me? I’m quite drawn to the idea of being a recluse. I’ll lock myself away, watching Cash in the Attic and live in filth.

“People will wander past my house in years to come and say ‘That’s where Mr Clary lives. He’s let himself go. To think he once pleasured the entire Lowestoft rugby team in one drug-fuelled night. And now he’s lying there caked in his own excrement…’

“If I don’t become a recluse I’m quite fanciful of a change of direction when I’m 60, doing something different. I think it’s important to stretch yourself, don’t you? But what I don’t want to do is say, ‘This is the final tour,’ then everyone will say, ‘Oh, I’d better go and see him before he dies,’ then five years later I’m back. I always feel slightly conned when people do that.

“So what I’m thinking is don’t be surprised if it is my last tour. But then again the old age mincer might be coming your way in five years’ time — if I’ve got a tax bill I can’t afford or my husband has run off with Christopher Biggins.”

For more information, including a full list of tour dates, visit julianclary.co.uk

Henley Festival tickets can be booked online at www.henley-festival.co.uk