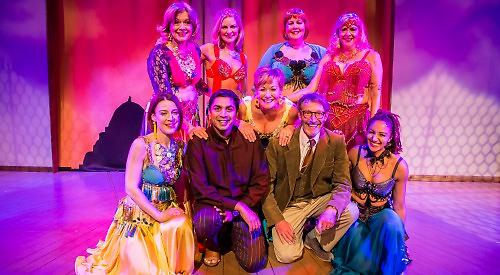 SALLY Hughes is feeling excited — about A Belly Full, the new dance-based comedy that has just opened at the Mill at Sonning, and about the theatre’s newly announced Christmas production of Singin’ in the Rain.

Running until Saturday, June 15, A Belly Full has been created with the 215-seater Sonning Eye venue specifically in mind.

When Marnie drags her much put-upon bestie Jane along to a belly dancing class they are swept into a shimmying circle of
sometimes endearing, sometimes outrageous women.

Their friendship is tested through the demands of their spouses, babies, work lives and the arrival of some unexpected roommates.

But through all the bellyaches, dilemmas, betrayals and some very “special” cakes, the two friends learn to face life’s challenges as they prepare for a special charity night at their local Turkish restaurant.

Sally, who has been the Mill’s artistic director since 1984 and took on the additional role of managing director in 2002, said: “I have long been looking for a play that matches the success and popularity of Stepping Out and Calendar Girls.

“Well, I have found it in this wonderfully funny and heart-warming play charting the lives of seven women who join a local belly dancing class. Can you imagine the comic potential in that situation?

“I’m delighted to welcome playwright and director Marcia Kash who, along with fellow writer Mary Colin Chisholm, has created this uplifting world premiere for the Mill.”

Sally revealed that the show’s nine-strong cast have been going to belly dancing classes in order to do justice to the material.

But when it comes to the Mill’s Christmas musical production of Singin’ in the Rain, based on the much-loved classic 1952 Gene Kelly film of the same name, the professionals will have to be on tap.

“You need seriously good tap dancers in it,” says Sally. “It’s going to be new choreography, but everyone expects tap dancing with Singin’ in the Rain, so you’ve got to be a dancer — not an actor that dances but a proper dancer to be in the show.

“We’ll start casting for it in July. The auditions for musicals go on for weeks because people have got to be able to do everything — sing amazingly, act amazingly and dance even more amazingly.”

Taking charge of the 14-strong cast will be director-choreographer Joseph Pitcher, who will once again be joined by musical director Charlie Ingles.

So great was the latter’s success that its run was extended by four weeks — taking it up to three months in total.

With Singin’ in the Rain booking for just over two months — from November 30 to February 8 — Sally is confident this year’s collaboration will prove just as successful.

“I’ve known Joe since he was a young dancer,” she says. “In fact, he was in the National Theatre production of Singin’ in the Rain 19 years ago.

“We were doing a small musical here and we had a choreographer who suddenly couldn’t make it at the last moment and they suggested Joe. So he came in as a young choreographer. He was great at working with actors who could move but weren’t dancers and making them look good.

“He subsequently did three or four or five shows for us, so when I directed Stepping Out at Christmas 2015 he choreographed the tap dance and movement in it.

“He was so good at working with actors that I said, ‘Joe, I think you need to direct something.’ I said, ‘Let’s find a big musical that you can direct and choreograph.’ So we set about looking for a musical — and it was High Society.

“And when I saw the first run-through I wanted to cry because it was so amazing. I mean, I did — I just sort welled up. His work in staging the shows and the movement on the stage and everything was just wonderful.”

Having himself started out as a dancer, Joe’s love of the theatre saw him determined to broaden his understanding of it.

“He decided he wanted to change course,” says Sally. “He put himself through drama school — he went to Bristol Old Vic, came back out, worked as an actor, went up to the RSC, and then he became resident director on Matilda in the West End. And he subseqently directed the international tour, so his career is on the rise.”

Having spotted his talent for directing, it must have been nice for Sally to see Joe’s career flourish in this way? “Well, it is. It’s great to bring new talent up. We just hope that on the way up they don’t forget us and they come back!”

Joe’s working partnership with musical director Charlie Ingles is now firmly established at the Mill, though the pair had worked together before joining forces at the Sonning Eye venue.

“We looked at a few different musical directors that Joe had worked with in the past and liked,” says Sally. “Now Charlie is in his early 20s and he’s a sort of a wunderkind — he’s just a musical genius at such a young age. In arranging music and also as musical director. And they kind of spark each other off with their ideas, so they work very well together.”

Have Joe and Charlie worked together away from the Mill?

“I don’t think so, no. At the moment Charlie’s doing Club Tropicana, which is on tour, and Joe’s about to direct the Scottish play, which we won’t mention the name of, and he’s been asked to go and do the international tour of The Producers. So they’re working separately but they come together in Sonning for Christmas.

“Because everyone is tap dancing in Singin’ in the Rain, Joe is
co-choreographing this year. I don’t yet know who we’re going to get to co-choreograph with him, but for the tap routines he’s going to get someone in who specialises in tap.”

With a cast of 14 and a five-piece band, the show is a big undertaking for the Mill, but Sally is clear that the investment is worth it provided the show in question is one that will appeal to people of all ages.

Between now and the opening night of Singin’ in the Rain, there are a further three shows to come.

Tam Williams will direct Noël Coward’s Private Lives, which runs from June 20 to August 3, having last been produced at the Mill in 1983. Then Brian Blessed will return to direct Agatha Christie’s Towards Zero from August 8 to September 28, before the veteran playwright Ray Cooney directs one of his most popular farces, Run for Your Wife, from October 3 to November 23 — the fourth time in four decades that the show will have been staged at the Mill, but the first with Cooney at the helm.

• Evening performances of A Belly Full run from Tuesday to Saturday, with Saturday matinées each week and on the following Sundays: May 12 and 19 and June 2 and 9. For more information and to book, visit www.millatsonning.com