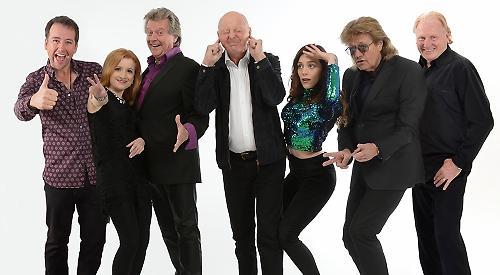 AN evening of two halves is in store next month when comedy legend Jasper Carrott and his schoolfriend Bev Bevan bring their touring show Stand Up and Rock to the Hexagon.

The pair, who were classmates at Moseley Grammar School in Birmingham, both went on to make their careers in showbiz following a brief spell as trainee buyers for the same city centre department store.

Now 74, one of Jasper’s first forays into the entertainment industry was to own a folk club in Solihull with his friend Les Ward. This, he says, was where his style of comedy began.

“I see myself as more of a raconteur — a storyteller — someone like Tom Lehrer or Bob Newhart. In the late Sixties I owned a folk club and used to be the MC — all the storytelling grew from that.

“The person I thought was the best in England at that style of performing was the late Bob Monkhouse. I was lucky enough to spend some time with him in the last year or so of his life and he was a wonderful man to chat to.”

Handily for someone running a folk club, Jasper — whose real name is Robert Norman Davis — also worked with John Starkey as a musical agent, which helped him keep his career on a sound financial footing. “The one thing that a start like that taught me was the business acumen that goes alongside being a comedian,” he says. “I have always been my own manager and I think during my career I have only had the wool pulled over my eyes two or three times.

“It also taught me financial planning, I always put some of the money I earned to one side so that when something like my tax bill came due, I always had the money to pay it straight away.”

It was something he drilled into his actress daughter Lucy Davis when she entered the business.

Lucy is now well known on both sides of the Atlantic, having played receptionist Dawn in BBC comedy The Office, as well as starring as a police officer in the long-running CBS drama series The Mentalist.

On reflection, it seems unlikely that Jasper would have passed on any of the advice he learned as one of “The Detectives”.

After spending time on the club circuit, he got his television break when Michael Grade at London Weekend Television liked one of his pilot programmes in the late Seventies. He later switched to the BBC and appeared in a number of series including Carrott’s Lib, Carrott Confidential and Canned Carrott. “The Detectives” first appeared in Canned Carrott, as Jasper explains.

“I have never really been interested in acting roles but ‘The Detectives’ came along while I was doing Canned Carrott. My writing team included Steven Knight, Mike Whitehill and David Briggs — the three of them later came up with the format for Who Wants to Be a Millionaire? and Steven is perhaps best known now as one of the writers of Peaky Blinders.

“What I was looking for was a theme for a sketch that could keep running through the series, and they came up with ‘The Detectives’ — but they said they felt the second detective should be a straight actor not a comedian.

“Steve Punt and Hugh Dennis were also part of the show and my instant reaction was, ‘Well, who were you thinking of?’ They said Robert Powell and much to their surprise I said I’d give him a ring. Robert enjoyed doing the sketches, and it was him that turned around and said it would make a great stand-alone series.”

The police were also involved with one of Jasper’s earlier appearances at the Hexagon, and this did lead to some worries at the time, as he recalls. “I think it was 1978 when I came to the Hexagon and it was at the height of the IRA bombings. We had to evacuate the theatre because of a bomb scare.”

That was then, but what can the audience look forward to with Stand Up and Rock on Saturday, September 7?

“Pretty much what it says on the tin!” laughs Jasper. “I really can’t do the long shows like I used to, so I come out and do around 30 minutes stand-up, and then my friend Bev Bevan does the rock bit for 30 minutes.

“Bev and I were at school together and he later went into pop music with groups like the Electric Light Orchestra and The Move. He will give you music from the Sixties, Seventies and Eighties with a great band he has put together, including Geoff Turton from the Rocking Berries.

“The second half is similar, apart from the fact that I stay on stage and join Bev as a guitarist after I have completed my comedy slot. It’s a show that people really enjoy, though with the age of a lot of my fans, and probably Bev’s as well, expecting a standing ovation is probably asking too much of them.”

• Tickets for Stand Up and Rock are £32. The show, which starts at 7.30pm, has an advisory age of 14 and up. For more information and to book, visit www.readingarts.com