Humpty comic wants to put us all back together 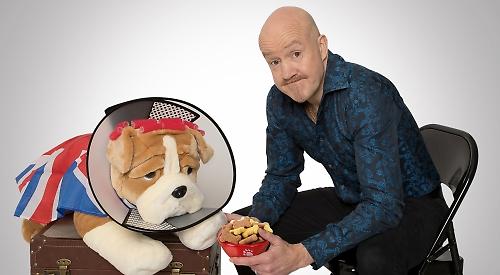 ANDY Parsons is on a mission with his new stand-up tour. In one simple nutshell, he’s looking to heal this divided nation.

The man who was a fixture on Mock the Week for years, has been in a very successful double act (alongside playwright Henry Naylor), worked on Spitting Image and brought us sell-out tours and unit-shifting DVDs such as Britain’s Got Idiots and Gruntled, is calling time on the negativity that reverberates on this split island with his new show, Healing the Nation.

“On my Twitter feed currently it says ‘Initially upbeat. Often disappointed’,” says Andy. “The general thrust of everything I’ve ever done has an optimistic note to it, and there is always something in the glass rather than there being something missing from it. Life can get extremely frustrating and your optimism can fade, but I retain the faith and I’m looking forward to getting out there and meeting people in some nice theatres.”

Said venues include South Hill Park in Bracknell, whose Wilde Theatre he is playing on Thursday (September 26).

Happy to be known as a political comedian, Andy has never shirked from putting the opinions he expresses on stage into full practice, having hosted People’s Vote rallies — including one in Parliament Square for more than 100,000 people — and fronted the charity Independent Age’s most recent Campaign Against Loneliness.

Plus he created the Slacktivist Action Group podcast in which he chatted to the likes of comics Josh Widdicombe and Angela Barnes, politicians David Lammy and Peter Hain, and commentators Suzanne Moore and Miranda Sawyer.

“I think we’re a nation desperate to be healed, in the sense that people would rather come together than diverge,” reflects Andy.

“In the current media analysis everyone is in the centre of their own social media bubble and everything is kicking off left, right and centre. So the idea for the tour was that rather than being incredibly one-sided and partisan and throwing stuff at the opposition, it’s nice to see both sides of the argument. I’ll be taking on viewpoints that wouldn’t normally find a natural home in one of my stand-up sets and try to genuinely see the other side of that argument.”

As he prepares to take Healing the Nation on the road, Andy is clear that while the country seems utterly divided with individuals permanently lodged on their own unwavering side of the debate, he believes that there are always more issues that unite rather than separate us. “The idea in the show is that everything is proving divisive at the moment and that no one is talking to each other or seeing issues from both sides. Essentially, people have the same concerns whether it’s health or education or jobs, and I want to narrow down the focus of what people do want and bring them together.

“The blurb of the show says that, if nothing else, we can be proud of some form of tolerance and freedom of speech throughout our history. It’ll be interesting to see where those concepts are going in the next few years.”

Former Labour prime minister Harold Wilson famously coined the saying that a week is a long time in politics. But in the febrile and often toxic terrain of modern British politics and society, events seem to alter dramatically on an almost hourly basis.

While this might be ideal for political correspondents, it can prove something of a challenge for topical comedians who are trying to take a show across the country over the course of many months. Andy, however, is confident about accepting the challenge of updating his material to suit the prevailing circumstances.

“When your show is topical then inevitably it will be very different when the tour finishes from where it started. This is mainly because of current events, but also it’s good to keep it fresh anyway, not just for the audience but for myself. If you’re performing more than 100 shows and just doing the same set every single night then it becomes a job rather than a pleasure.”

When you watch Andy Parsons in full flow, it’s clear you’re witnessing a performer who is not only having a great time but is enjoying the pleasure he’s passing on to others.

Partly, this might come down to a realisation that it’s a good time to be in the topical comedy game, with such rich pickings to be had from the various parties and many individuals across the ever-elongating political spectrum of the UK.

“It goes in cycles, and for a while political comedy was dead,” says Andy. “If you suggested to a TV company that you wanted to have some sort of a political comedy vehicle they’d say ‘Why would you want to do that? No one is interested.’

“But now there’s a whole slew of them. The reasons for that are various, but the bottom line is that people are more interested in politics now simply because it’s affecting more of their lives.

“And now that more people are talking about it, there are comics you wouldn’t associate with politics who will still address it in some way because every aspect of life is somehow influenced by it. That was less true 10 years ago.”

Whatever the future holds in terms of politics in Britain, Europe, the US and across the wider global landscape, it’s comforting (healing, almost) to know that comedians such as Andy Parsons will be around poking fun at those who claim to lead or speak for us.

Tickets for Healing the Nation at South Hill Park are £17. The show starts at 8pm and is recommended for ages 14 and up. To book, visit www.southhillpark.org.uk