US comic uses yoga to warm up for gigs 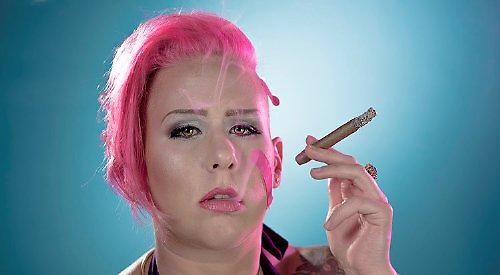 SHE’S the only qualified yoga instructor on the UK comedy circuit, but there’s nothing contorted about Abigoliah Schamaun’s unique brand of humour, writes Peter Anderson.

A product of the New York stand-up scene, she started coming to the Edinburgh Festival in 2010 and liked the UK so much that she has been based over here since 2014.

After supporting a host of other comedians over the years, she is bringing her debut solo show “Do You Know Who I Think I Am?!” to Norden Farm Centre for the Arts in Maidenhead on Thursday (October 3).

Has she found that opening for other acts has stood her in good stead on the tour so far?

“Most definitely. It is great to be able to perform in front of real comedy-savvy audiences.

“The main thing for me was that I got to perform in front of audiences that liked a certain style of comedy and so I was able to tailor my act to suit.

“My dad once said to me that 90 per cent of life is just showing up, and that is so true. With stand-up you have to do it as much as you can, whether it is as a warm-up artist or at an open-mike night.

“By doing that you can achieve the most important thing — to find your own comedy voice and persona. Then you can move on and hopefully succeed as you.”

She may have grown up in the conservative Midwest of America, but with her pink hair and tattoos Abigoliah is unabashedly liberal in outlook.

That being so, who does she regard as her greatest comedy influences? “Stand-up-wise, Patton Oswalt. But I also loved Happy Days and I Love Lucy with Lucille Ball. In fact, there was a day of her shows on television once and my dad recorded them — I have nine hours of VHS tapes.”

Abigoliah’s performer bio describes her as “a hardcore yoga bunny with surprisingly squishy thighs” and “a boring heteronormative disguised as a luscious lady lover”.

Her comedy deals with such diverse topics as the differences between male and female personal grooming, how to repurpose offensive words and make them great again, and having the campest boyfriend ever.

On the yoga front, does she ever use it to wind down after a show — or would that be too predictable?

“It does help me de-stress and get into a nice frame of mind for starting my act. However, I am usually on so much of a high after a performance my thoughts are more like ‘Where can we pop to for a drink?’ than doing yoga.”