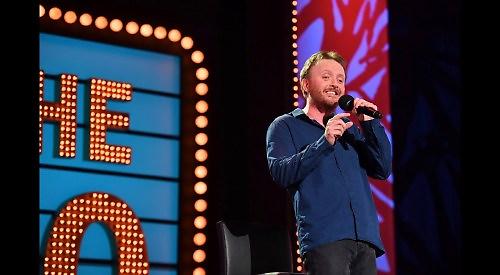 A COMEDIAN who previously starred on the BBC’s stand-up showcase Live at the Apollo is to headline Dunsden village hall next weekend — in aid of the venue’s new dishwasher fund.

Chris McCausland will top a bill made up of four stand-up comics, all of whom are professionals working the UK comedy circuit.

The show on Saturday, October 5, is being organised by Flock Comedy, which runs pop-up comedy nights across the UK.

Supporting Chris McCausland on the night will be Wayne the Weird, Marti and Earl Okin.

A spokesman for Dunsden village hall said: “Chris McCausland, who is blind, has been performing
stand-up since 2003 and has long been firmly established at the very top of the UK’s live comedy circuit.

“He performs all over the country, including regularly at the world-famous Comedy Store in the heart of London’s West End.

“Chris has appeared on Live at the Apollo, three series of Comedy Central at the Comedy Store, ITV’s Stand-Up Hero and Loose Ends with Clive Anderson for Radio 4.

“A firm favourite with Flock Comedy audiences, Wayne the Weird performs a heady mix of stand-up comedy interspersed with mind-boggling magic tricks and the odd dash of crass stupidity.

“Marti tells tall tales intertwined with confused British idioms. He cuts a dash in his check shirt, braces and Dr Marten’s. We can’t place his accent but he’s not from these parts.

“For years, Earl Okin has performed under the byline ‘Musical Genius & Sex Symbol.’ He first learnt his stagecraft in folk clubs. When they were replaced by comedy clubs, Earl moved effortlessly from one to the other and has been a headline act on the UK comedy circuit for decades, highly respected by all his fellow performers, young and old.”

The first half of this year saw Liverpool-born McCausland, 42, embark on his debut stand-up tour, Speaky Blinder, which took him to venues including Norden Farm in Maidenhead and Reading’s South Street Arts Centre.

A graduate of Kingston University where he studied software engineering, he initially worked as a web developer until his deteriorating eyesight prompted a change of direction. It was while working in sales that he first decided to give stand-up a try.

Having since made it his profession, what does he find most challenging about being a touring comedian?

“The most challenging parts of life as a comedian for me are all of the logistical ones — travelling the country to different venues and even getting to and from the stage at a show. Obviously I’ve found solutions to these aspects of the job over the years. Once these issues have been overcome, the actual
on-stage stand-up part of the job is the easy bit.”

McCausland and his wife have a young daughter. How has he found being a parent? He laughs. “As my daughter has got older and more communicative, being a blind dad has got easier in lots of ways. There was a really difficult period when she was a one-year old where she was mobile but silent, crawling about on the floor but hardly making a bloody peep.

“Looking back, maybe I should have put a bell on her, or a Bluetooth tracker so that I could ask Alexa to find her. Now she’s five, though, it’s probably things like not being able to help her properly with her reading and her writing. How many of the other kids in her class have already got better handwriting than their daddy?”

With him a Northerner and his wife Brazilian, has this sparked any culture clashes at home? “As you can imagine, we are very different in terms of our culture, and our biological response to temperature.

“Whereas my wife will still require a winter coat in 22 degree sunshine, I struggle to function in anything warmer than about 26. This obviously creates a great deal of conflict when the central heating comes into question.

“I talk about this in the show, but I think there is a good chance that one of us may one day be found dead in the hallway with one arm reaching out towards the thermostat, with the other one of us having skipped the country.”

What has been his career high point so far? “Definitely filming Live at the Apollo for the BBC. Not only was it the biggest career opportunity that I have had, but it was also the biggest actual gig that I had done, getting to play in front of 3,500 comedy fans at the Hammersmith Apollo. I have lived in London for more than 20 years and have been to see lots of my music and comedy heroes perform on that stage, and so to get to do the same was a dream come true.”

With a capacity of around 100 seats and a fully licensed bar, Dunsden village hall has recently been refurbished. Proceeds from the evening will go towards a new commercial dishwasher.

Doors and the bar open at 7.30pm and the comedy gets under way at 8pm, with an expected finish time of 10.30pm.

Tickets are £15, available in person from Binfield Heath Stores or via www.buytickets.at/dunsden