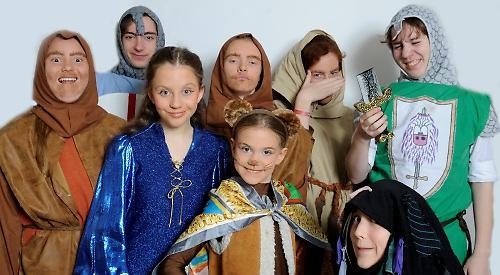 WITH panto season fast approaching, Henley Children’s Theatre’s production of Puss in Boots at the Kenton Theatre has a twist or two in the tail...

The group have been producing pantomimes in the town for 50 years, but always while keeping up with the times.

For this year’s show, which runs from December 30 to January 4, director Muffin Hurst has updated the script so that we find the traditional lead male replaced by a girl.

At the same time, a rather weedy Pantomime Princess becomes a somewhat feckless Prince Georgeous, and a boy has broken through the ranks to take the role of Puss.

The story follows Jesse, who inherits a talking cat and encounters some dopey peasants on her way to win a title and fortune from the Giant Trump.

Queenie’s comedic Knights of the Rectangular Table bring some Monty Pythonesque humour to the, er, table — and the savvy Puss helps thwart his nemesis and recapture Carabas Castle.

Muffin said: “There are two casts who perform in alternate shows and each is made up of an enthusiastic group of local children, aged three to 16, who delight in bringing energy and happiness to their audience. They will sing, dance and recount their tale, which is suitable for all ages. HCT excel in feelgood entertainment — if you’ve not been before, make sure you get tickets for all the family for fun and laughter at the best value show in town.”