Film fan’s on a mission to make people laugh 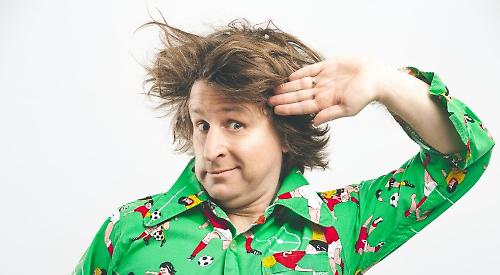 That’s right, Milton Jones — Mock the Week’s resident oddball, Radio 4 regular and king of the surreal one-liner — is back on tour, and this time he’s an international man of mystery.

The wild-haired joke-teller might not be the obvious choice for a secret agent, but in Milton: Impossible the 55-year-old comic will be taking his audience through an action-packed story via hundreds of his trademark, exquisitely-crafted pieces of wordplay.

The comedian is also performing at this year’s Henley Festival on Thursday, July 9. So what made Milton decide on the spy theme for this new show?

“Basically, I came up with the title before the show! I thought ‘That sounds good!’ So I made a rod for my own back by theming it. But sometimes it’s easier to write to a theme than have a completely blank page. The show is based on Mission: Impossible but Mission: Impossible has a huge budget and lots of special effects. My show is just me and some hats and about 250 jokes. It’s low-tech instead of high-tech.”

Milton had previously joked that the show is loosely based “on a Tom Cruise film I saw once called something like Undo-able Task”, adding: “In it I play a Milton who appears to just have a job in Asda, but at night he’s also an international spy involved in secret things and quite bad situations. But if daft jokes give you an allergic reaction and send you into a coma, then don’t come running to me! Also, at a difficult time for our country, I believe there’s a chance this show could unite the nation. Admittedly quite a small chance.”

Like his last two tours, Milton Jones is Out There and The Temple of Daft, the new show has a narrative element to it.

‘If you’re going to do a show for over an hour you can’t just tell bits,” nods Milton. “That’s what I do on Mock the Week and Live at the Apollo, which is fine, but you want something with the veneer of satisfaction, otherwise it’s too fragmented. This show’s got an interrogation scene, a car chase with a swivel chair, and I end up escaping on top of a Vince Cable Car. It’s not strictly realistic, but it’s as daft as ever.”

Before embarking on a tour, Milton performs a number of work-in-progress shows to test his material. How important are these to the end product?

“They’re very important,” he laughs. “Even after all these years, I’ll think I’ve written the best joke ever and it turns out to be one of the worst jokes ever — but what I’ve improvised off the back of it stays in the show. So I would have never got to point B without going through the dreadful point A.”

Does he end up with a lot of great jokes that just don’t fit into the theme or narrative of the show?

‘Yeah, I do. There are about 250 jokes in the show, but I reckon I end up writing about 350. A lot of them are then used somewhere else — in the next tour, on radio, on Mock the Week — so they’re never wasted. And if they’re particularly brilliant then I might go out of my way to include them in the show!”

What in his view makes for the perfect joke? “If a gag works, it makes a cartoon in someone’s head — a very brief picture where they think they know where it’s going, and then you pull the carpet from under them and it was all about something else all along. It’s reverse engineering from an idea or a phrase.”

Milton’s last tour saw him play to more than 100,000 people. Millions more have seen him on Mock the Week, on which he has appeared over 40 times. What’s more fun to do, a live show or a TV appearance?

“They’re both good in different ways. Going to small place on a Saturday night where they’re all determined to have a great laugh — I don’t think that can be beaten in one sense.

Does he always watch his Mock the Week appearances back? “Yes, because I need to know what they used and what they didn’t. Doing several episodes, the same subjects may come back, so obviously I don’t want to say the same thing that has already been aired. And then, occasionally, I’ll be channel flicking and I’ll come across myself, as it’s endlessly repeated on Dave. But I watch them from behind a sofa a bit.

“I’m very grateful to Mock the Week for giving me a wider platform, and also a slightly different audience. It’s a younger audience, and those people will come to a tour show, sometimes even bringing their grandparents or parents. My audiences are a motley selection of people, which I quite like, actually.”

How does he go about catering for those different generations in the same audience? “I’m aware that if I make a reference to Instagram or something I’m going to lose everyone over 50. But that’s fine because overall my references are quite general, and even if you didn’t get it, the joke’s only going to last 20 seconds, so there’ll be something else along soon enough.”

As well as his UK tour, which runs until the end of November, Milton currently has another Radio 4 series in the works, plus more episodes of Mock the Week. But what’s up next after that?

“I don’t have anything else planned! But who knows what will turn up. Sometimes the unexpected things that come along are the most interesting — other quiz shows, a corporate event abroad — things you wouldn’t have predicted. Doing Celebrity Mastermind or something, you know? You get to meet and talk to people you wouldn’t otherwise.”

What was his specialist subject on Celebrity Mastermind?

“I mean, if I’d have taken it seriously I’d have done something like Arsenal. But when he announced it — ‘Your specialist subject is potatoes’ –— the audience all laughed. I came last, obviously. But I’m employed as a comedian. It’s entertainment. If I get to do it again I’ll choose carrots.”