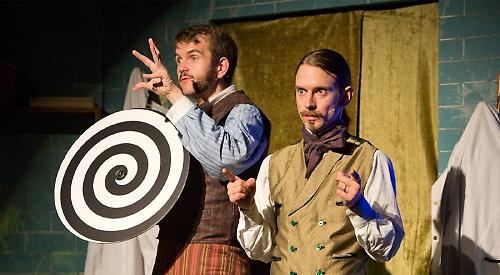 GENTLEMEN magicians Rhys Morgan and Robert West have a secret past that they are preparing to share at the Kenton Theatre this February half-term.

A spokesman for the Victorian-style duo said: “They are genuine, bona fide, legitimately qualified scientists — and now they are bringing their love of enlightenment to the stage.”

The pair’s new touring show, titled Unbelievable Science, is playing at the New Street venue at 2pm on Thursday, February 20.

The spokesman added: “Expect explosive thrills, chemical spills and a risk assessment that gives their stage manager chills — all backed up by the daring duo’s trademark wit, charm and detailed knowledge of the scientific method. Leave your lab coats at the door — it’s time for Unbelievable Science.

“Please note that Morgan & West take full responsibility for any horizons broadened, passions inflamed or minds blown during the course of the show.”

On television, the duo — who style themselves as magicians, time-travellers and all-round spiffing chaps — have fooled Penn & Teller, competed to be The Next Great Magician (both on ITV) and even attempted to escape The Slammer (CBBC).