Songwriting satirist is saving the world one ditty at a time 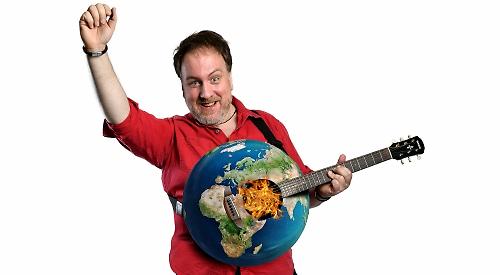 “MUSIC has charms to soothe a savage breast.” So said William Congreve at the turn of the 18th century.

With a six-string guitar to hand and a head full of silly rhymes, his new show is semi-seriously titled “Ten Songs to Save the World”.

Mitch, who has just turned 50, spent his early years in a place known for great comedians as well as great singers.

“I grew up in Liverpool in the Seventies, wading through the debris of the Mersey Sound and Beatlemania,” he recalls.

Musical skills were strong in his family, but it seems that nobody until him had found fame through it.

“They were very musical, if not professionally so, with a couple of exceptions,” he smiles. “I don’t think I’m related to anybody who can’t play something.”

Where did he get the idea to blend songwriting and live comedy? “I first did
stand-up at the age of 21 in Montréal, Canada — it’s a long story — and incorporated music and songwriting right from the get-go as it never really occurred to me not to.”

Maybe there’s a clue in his choice of comedy influence. “The first stand-up I remember admiring was Billy Connolly, who belonged to a slightly earlier generation. In fact, I’ve always thought that artistically I’ve got more in common with his generation — the early Seventies ex-folk club raconteurs — than with any subsequent comedy movement.”

For Mitch, are there any more worlds left to conquer? “I’ll perform anywhere where there’s a crowd who can see and hear me, I’ve never been to Australia and I’m really not sure why.”

For more information and to book, visit www.whatsonreading.com